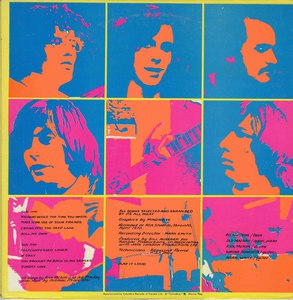 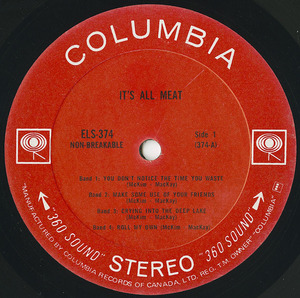 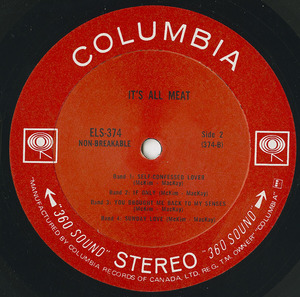 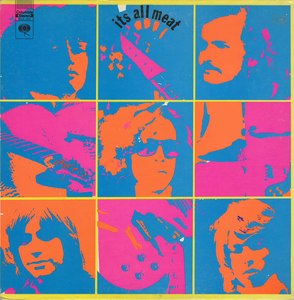 Lead by principal songwriters drummer Rick McKim and keyboardist Jed McKay, whose prior endeavours included production credits on the Underworld's much-sought-after 1968 garage single 'Go Away' (Regency), and managed by none other than Jack London, he of mid-sixties Toronto combo Jack London and the Sparrows, the Toronto five-piece It's All Meat straddle the cusp of mid-sixties psychedelia. Their lone 12" platter, 1970's It's All Meat found limited release north of the 49th only on Columbia Canada, hence its stratospheric price point amongst the vinyl anorak set.

The obvious adolescent swagger of the crotch-grabbing moniker aside (not to mention an Animals song of the same name), It's All Meat actually took their name from a 1960s dog food commercial extolling its beefy canine chow as "100% meat, no filler!". Regulars at Toronto club The Cosmic Home, though at the time somewhat overshadowed by the more successful Paupers, Motherlode, Kensington Market, et al, It's All Meat meld the blissful with the blistering, the bucolic with the beefy.

This Hallucinations CD reissue, re-mastered beautifully from a vinyl source by Bruce Ley in Toronto, with only brief stipples of surface noise evident, comes bookended with two of the group's finest non-LP songs. The disc virtually explodes with their debut 7" 'Feel It' from 1969 (see vinyl Pebbles Vol. 9), a searing slab of Stooges/MC5 proto-punk, a near total Detroit guitar blitz that is then rather naively, though effectively, punctuated with cheesy Farfisa chords. All meat indeed!

The spectre of Jim Morrison and the Doors looms larger throughout the LP proper however, as McKay's Farfisa morphs into a more eerie backdrop to his bold operatic vocals, especially on 'Crying into the Deep Lake'. 'Roll My Own' transcends the hoary cliche of its title with haunting Hammond organ and an ample guitar/vocal mix, recalling John Kay and Steppenwolf. 'Sunday Love' opens like early Velvets with pastoral guitar before mounting a torrid Iberian rave-up. But there's gristle to be trimmed here as well, as It's All Meat sometimes bogs down in tepid blues riffs and overwrought vocals.

As luck would have it, It's All Meat's strongest track lamentably surfaces amongst the five unreleased demos included in the CD reissue. 'Astrology''s bouncy funked-up bass and minced slices of guitar chords make for a stunning dance track (in a late-sixties freakout kind of way). And the muddled mastering (or lack of it rather) notwithstanding, its chiding chorus ("There's a little too much technology, and not enough love") is sadly not as dated as it should be. Alas, the glaring omission of 'Astrology' the first time around is what separates the one-hit wonders from the never-wases (though I suppose at least it has kept them off the casino circuit).

This was a treasure to find! I bought it on CD, and man, it's awesome! This is like New York Dolls as a 1969 garage rock/heavy psyche band who put an album out in 1970. The vocals are like Mick Jagger with more punkish sneer. This is the kind of thing I search for: crunchy guitars, intriguing lyrics, attitude in the vocal delivery, and some decent variety. I love the hard rockers the best, but "Crying Into the Deep Lake" is wonderfully eerie, sounding like The Doors meet 1969 Pink Floyd, and "Sunday Love" is bi-polar with a light, dreamy, trippy side and a harder, crunchy side. "Make Some Use of Your Friends" and "Roll My Own" are my two favourite tracks. The CD comes with some great bonus tracks. Check out this album on YouTube! That's where I heard it and decided I had to have it!