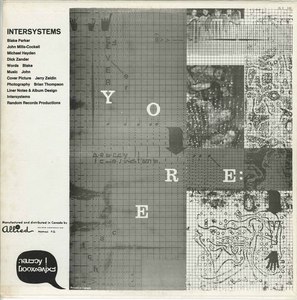 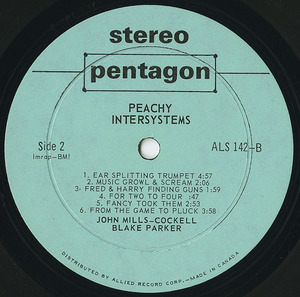 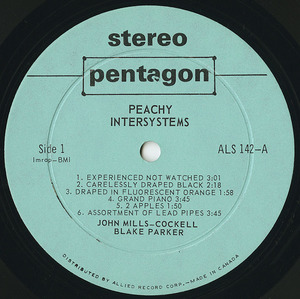 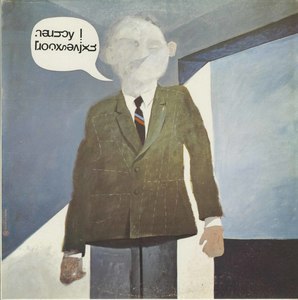 The sound work of Intersystems cannibalized stray bits of McLuhanism, psychedelia, Cagean experimentalism, and even the modernist gestural strains of nascent electronic music, yet it was all couched within a very particular DIY ethos. Peachy pushes the meticulousness of Number One Intersystems (NMN 093-1LP) even further and, as such, represents a more balanced amalgam of Intersystems' various disparate stylistic and emotional elements. The truncated opening cut "Experienced Not Watched" is deceptive, beginning with lush, tuneful organ swells that almost border on the ecclesiastical and washed-out metallic pulsations. Yet, the track comes to an abrupt end. What follows is thinner and more gestural, imbued with both poise and awkward buoyancy, owing more to musique concrète than anything on Number One Intersystems. Each sound is framed within ample negative space, inviting listeners to savor each moment, yet its dynamism, and boisterousness, mischievous character steer it well away from being too precious. This impression is reinforced by the decidedly rugged and opaque timbre of much of the sonic activity. Peachy's balance can also be attributed to its consistent flow. The album may superficially be divided into discrete tracks yet the pieces follow one another seamlessly, conveying a single arc, with many continuities and recurring motives. Many of these motives are just mere pithy jolts or shudders of white noise that dart in and out of the aural scenery. In "So They Took The Guns", it matches the gestural profile of the opening cut - it's suddenly lopped off, shifting decisively back toward a slice of Parker's grim narrative, planted squarely in the foreground amidst various percolating abstract chatter. Just as the musical textures have a more unified logic, Parker's texts are also more integrated into the total picture, both aurally and thematically. Despite its sharp veerings into death and violence, the abrupt leaps have a more absurd timbre, than one of abjection and morbidity. And the sudden shifts, of course, are complemented well by the restless intensity of Mills-Cockell's contributions. Parker's voice is subject to a wider spectrum of electronic treatments than before. They're also situated in various places, both spatially and within the mix. Re-mastered by John Mills-Cockell. Mastered for cutting by Giuseppe Ielasi.