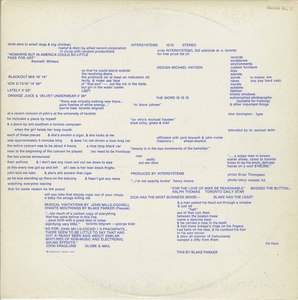 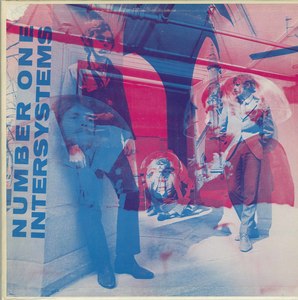 mega rare Canadian freaked out experimental sound poetry LP. Musical visitations by John Mills-Cockell who created intense bizarre electronics noise, and chaste mouthings by Blake Parker. Cuts included "Lately", "Vox 3/13/67", "Orange Juice & Velvet Underwear", and "Blackout Mix". Housed in great psych cover art, and original shrink still wrap around the cover. Near Mint condition with one small dent at upper opening edge. Disc is Near Mint with a few superficial sleeve scuff lines that do not affect playsback. Drug induced wild electronics by John Mills-Cockell and trippy outsider narrative by Blake Parker. The package offers a glimpse into the installations and psychedelic environments that Intersystems created (for example, the Mind Excursion Center) during the 1960's, with the time-capsule effect as reported by the media including the Toronto Telegraph and Time Magazine. (The Mind Excursion Center by Michael Hayden and Intersystems, was the pre-cursor to the Electric Circus in NYC, also designed by Michael Hayden) "Orange Juice & Velvet Underwear" is the kind of poetry that will bring you to tears in the name of Canadian Love. The debut LP from these noted avantgarde freaks is basically a spoken word album with sound effects. A narrator who sounds like a college student parodying JFK rants and rambles poetry and surreal short stories while primitive synth and oscillator sounds pass through the soundscape. There is not much "music" per se, but it has a certain psychedelic feel. The connection between the words and the sound fx isn't consistent, and it seems that both elements were at least partly improvised. The last track gets into some interesting eerie "ambient" moods, while the mannered, one-note narration is a drawback over the full duration of the LP. A testament of the freaky arty 60s with happenings, music concrete and "why not?" aesthetics, but ultimately I guess you had to be there. Respectworthy, but for genre fanatics mainly, and a somewhat inauspicious start for the label that would later bring us Plastic Cloud and Reign Ghost.
-PL