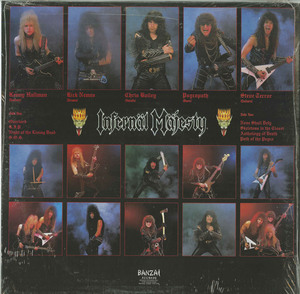 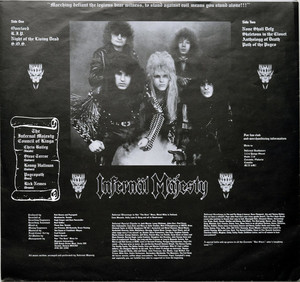 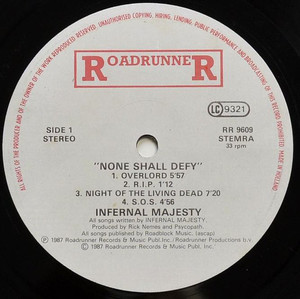 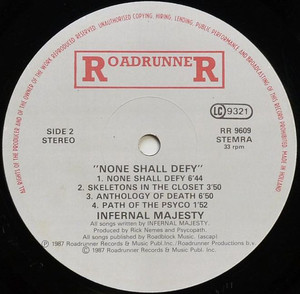 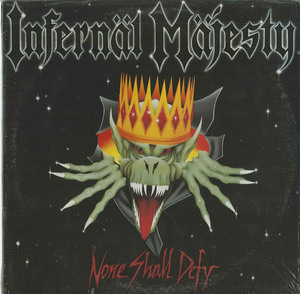 All vocals on this release were done by drummer Rick Nemes.

Re-released in 1996 by Displeased Records with bonus tracks, from the Nigresent
Dissolution demo:

Infernal Majesty's main objective was to write an album of complex and exciting thrash tunes, to unleash onto the ever evolving thrash market. In order to begin this process, they recorded a 24 track four song demo at Metal Works studios in Toronto (owned by members of the band TRIUMPH).
With the demo tape completed, copies were sent out through various channels, and a record deal was signed with Roadrunner Records in New York City. The amazing thing about the signing was, Infernal Majesty had never sent a copy of the demo to Roadrunner, a Magazine in Europe had sent one to them with a recommendation to sign the band.

In September 1987, the world wide release, of the now, cult classic, "None Shall Defy" was launched. The album included such cuts as, Overlord, which was the code name for the Normandy invasion, Anthology of Death, about the notorious Jack the Ripper, Night of the Living Dead, which was inspired by the march of the zombies scene in the classic horror film of the same name. The title track, None Shall Defy, became the band's first video. They received very promising reviews from leading magazines such as, Metal Hammer, Aardschok and Kerrang. Displeased Records lists Infernal Majesty along with Venom, Bathory, Hellhammer, Kreator and Death as one of the main influences on the death/black metal music scene. Fan mail from distant locations such as Turkey, Saudi Arabia, Brazil, China and New Zealand demonstrated the magnitude of the expanding thrash market.

In 1988, Rick Nemes and Psycopath left Infernal Majesty and shortly after were replaced by Kevin Harrison (drums) and Bob Quelch (bassist). With the new line-up, Infernal Majesty's next step was to record 2 song demo for a new album at Wellesley studios in Toronto. The tape "Nigresent Dissolution" was completed. It remained unheard by most listeners as the tape was not made available to the public until Displeased Records added the two tracks "Into the Unknown" and "Hell on Earth" to the CD release of "None Shall Defy". A third, 4 song demo was completed with a local producer. With the help of Brian Taylor, (famous for his work with Sacrifice), Creation of Chaos was completed with new vocalist Vince , as Chris Bailey had left the band. Creation of Chaos was sold by mail order and distributed by Cargo Records to listeners around the world. Infernal Majesty went on to play select shows with Razor, Kreator, Coroner, Death Angel...etc. Infernal Majesty's cult status was solidified with the masterful cover of their ultimate thrash classic "Night of the Living Dead" by Sweden's Dawn. Other bands such as " Christ Denied "from Spain, Illdisposed and Goddess of Desire have recorded - played songs by Infernal Majesty. Imitation is the ultimate form of flattery which proves true with reports of bootlegged CD's, live videos, T-shirts and posters.
sire have covered Infernal Majesty material in their live shows .

The CD intitled "Unholier Than Thou" , was released on August 15, 1998. A European tour with Cannibal Corpse and Dark Funeral followed in September 1998 and was a great success. April 2000 saw the release of "Chaos in Coppenhagen" which was a live cd release showcasing Infernal Majesty live. April 2001 Hypnotic Records along with Big Daddy re-released "Unholier Than Thou" in the USA, this CD release was remixed and remastered and encluded a live version of "Night of the Living Dead"

In Early 2004 Infernal Majesty signed with Galy records for the release of "One Who Points to Death" which will take place on April 6th, 2004.