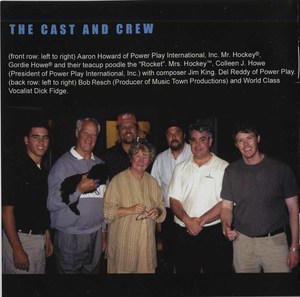 CD-Mr and Mrs Hockey BACK 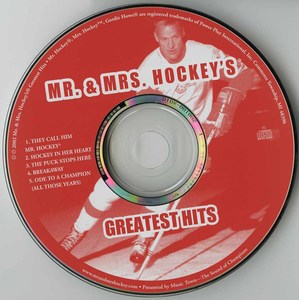 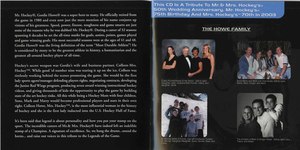 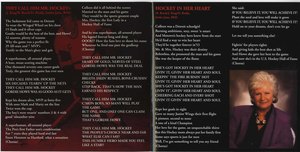 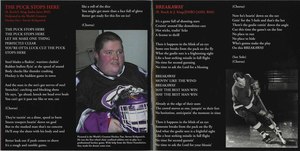 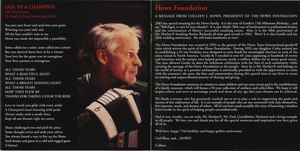 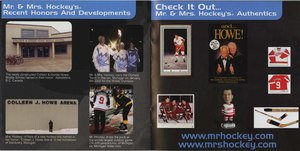 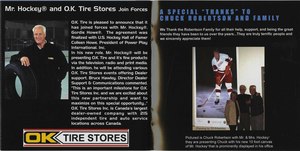 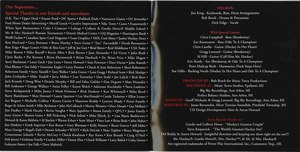 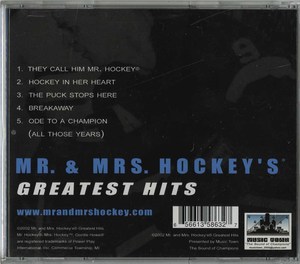 CD-Mr and Mrs Hockey JEWEL BACK 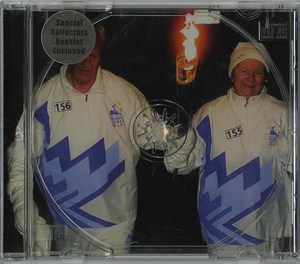 CD-Mr and Mrs Hockey JEWEL INSIDE 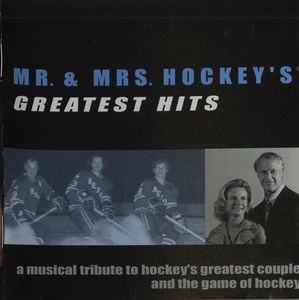 One of the most unique sports music CD's ever produced has just been released. This great CD is a musical documentary that chronicles the life and times of Gordie and Colleen Howe, Mr. & Mrs. Hockey® in words and music. "They Call Him Mr. Hockey®" has been the theme song that's preceded many of Gordie's appearance's at such events as the "Cold War" Game on October 6, 2000 between U of M and MSU in front of a record crowd of 74,000, the 2002 NHL Celebrity game, and other numerous sports shows and interviews, as well as the recent video, "Moments of Magic- A Celebration of Hockeytown", recently released by USA Home entertainment and the NHL. "Hockey In Her Heart" was recently debuted in Sandusky, Michigan at the new Colleen J. Howe Arena. "The Puck Stops Here" is dedicated to the Howes late friend Steven Kirkpatrick who in 2001 became the first person to play in a pro hockey game as a goalie in a wheelchair. Enclosed with the CD is a 16-page special collector's booklet that recaps their recent honors and developments and gives a special thanks to all those who made it happen throughout the last few years...

Enclosed with the CD is a 16-page special collector booklet that recaps their recent honors and developments and gives a special thanks to all those who made it happen throughout the last few years...

Music Town is the Sound of Champions!!! Unique musical productions that pay tribute to the Life and Times of Sports Greatest Heroes and the game they play.

The Music Town studio group, The MVP's, consists of songwriters Jim King and Bob Resch who joined forces in 1995. Resch, an Ypsilanti resident, produces, plays drums, percussion and writes the lyrics. King, an Ann Arborite, plays the keyboards. Their collaborations with vocalist Dick Fidge from Dearborn Michigan, have produced some memorable moments.

All have performed in National touring groups at some point in their career. Fidge was with The Sunday Funnies on Rare Earth Records that was produced by Andrew Loog Oldham of the Rolling Stones fame long about the Sticky Fingers era. Fidge currently fronts a local group called The Late Show and Dr. Pocket. He also does many commercials for Ford and Pontiac.

Jim King toured with the Automatix on MCA Records and had very successful regional group called Masquerade. He currently owns and operates King's Keyboard House in Ann Arbor and does session work.

Music Town Productions produced a compact disc called HEART OF A CHAMPION, released in 1998, and available at most MICHIGAN memorabilia stores. It's a collection of songs that tell the story of a die-hard UNIVERSITY OF MICHIGAN fan's journey through the land of Maize and Blue. A fan favorite in the local area is "Rockin' in the Big House" which includes famed Michigan Stadium announcer Howard King and the legendary voice of sportcaster Bob Ufer. GO BLUE!!!!

In the fall of 1998, Music Town entered a song in a WRIF contest where 150 local bands penned and produced songs for The Official 1998-99 Detroit Red Wings CD-ROM. The MVP's "Back 2 Back" a funky salute to the Stanley Cup Champions was selected. In addition other Red Wing affiliate stations have played selections from the Music Town catalogue for highlights.

In 1999, Bob Resch had a meeting with Colleen Howe and played some of the Red Wings music as well as other sport themes. Mrs. Hockey was impressed and wondered if Music Town would like to write a song about a gentleman that use to wear number nine and play for the Wings. It took a couple of years to get everybody's schedule to mesh but at long last here's "MR. HOCKEY". This original song has a driving groove that pays tribute to the greatest player of all time, Gordie Howe. The song gives the listener key statistical information highlighting Gordie's career and family with a special appearance by Mr. and Mrs. Hockey.

Songwriters Bob Resch and Jim King have composed and produced Mr. & Mrs. Hockey's® Greatest Hits for MUSIC TOWN, The Sound of Champions. Resch's love for the game and respect for Mr. & Mrs. Hockey® inspired him to fire up the MUSIC TOWN session band, "The MVPs" to create songs that honored Gordie's illustrious career and Colleen's amazing impact on the game of hockey.