Horn - On the People's Side 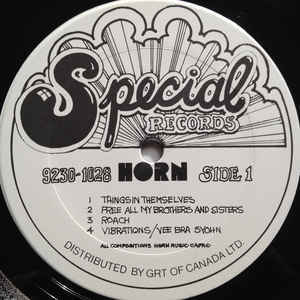 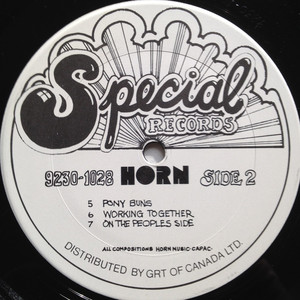 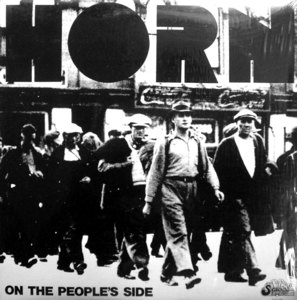 On the People's Side

I culled this tasty gem from the personal collection of recording engineer Brock Fricker. While the overall approach maybe more straight ahead, fans of Frank Zappa will note a striking resemblence to the Mothers of Invention in the arrangements on this album.

With all that’s happening in the global economy at the moment, the theme of this album is more relevant than ever. The liner notes come from a letter to Canadian Prime Minister Richard Bedford Bennett on 14 May 1935:

"The very least your government should do under the existing circumstances, is to grant direct relief to these boys, and let them live their own lives. This I admit is no solution to the unemployment Question in its broader aspects, but it is at least more human than the herding of our youth into isolation and despair. It is not a question of food and clothing but rather a question of mental distress brought about by days and years of hope, which has become hopeless and unbearable. It must end quickly if we are to avoid the disaster, which is a natural outcome of intolerable conditions – a condition of suffering in the midst of abundance."

As to subversive organizations and the coercion of agitators I can only say that to me the so-called agitator is the salvation of any man’s country; he is the symbol of progress; without him our civilization would wither and fade.

It is high time that we forget about this communist bogey and tackle these questions from the stand point of their merit of leadership. We can no longer let a cause suffer because there happen to be a few individuals in the ranks who have been indiscrete in days gone by. The youth of the land have awakened to the injustice of their position all along the line, and the day of reckoning is close at hand.
-Chris
visit Chris's website here: http://basementrug.com/

Music by Bruce Burron and Horn, except Goof the truth and The Buzz which was written by Gary Hynes; Lyrics: David deLaunay

Musicatto lyrics:
Often you’ve looked
and your past has appeared
a veil
on your present.
Imposing what you are
on what he/she is.

Often you’ve held yourself back
and you have appeared
veiled
between you and he/she.

Often you’ve stepped boldly forth
and allowed futures unknown
to become
your present.

Let’s meet walking tall
on a musicattoed wall
from where we’ll
wage war
on real enemies,
Not those we hide
in each of us.