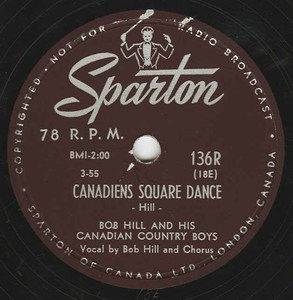 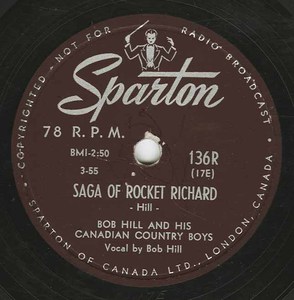 As Montrealers mark the 60th anniversary of the night hockey fans’ anger boiled over outside the old Forum after the suspension of Canadiens legend Maurice Richard, one man is remembering how the night changed his musical career.

Bob Hill was a popular musician and radio personality in Montreal in those days, and the night of the riot — March 17, 1955 — he wrote and recorded a song about Maurice Richard that became a smash, "The Saga of Rocket Richard".

Hill, now 83 years old and living in Notre-Dame-de-Grâce, remembers the night like it was yesterday.

”I was playing for a barn dance out in the Eastern Townships with a number of my regular musicians. Coming home from that, around midnight, we heard on the radio what was happening down at the Montreal Forum.”

“Something struck me and I just said to my friends this is something big. I just felt that this was out of the ordinary and that it involved Rocket Richard. I got the idea of doing my thing — writing a song about it.”

The events that led to the Richard Riot began a few days earlier in Boston, when the Canadiens were playing the Bruins on March 13, 1955.

Two days later, Richard was hauled into league president Clarence Campbell's office. Richard had struck an official in Toronto three months earlier, and Campbell had had enough. With just three regular season games remaining, he made the unprecedented move of suspending Richard for those games plus the playoffs.

Campbell was vilified in the press, but announced that he would attend the next Montreal home game, set for St. Patrick’s Day.

Despite urging from Montreal Mayor Jean Drapeau to stay away, Campbell attended the game.

Inside the Forum, the angry crowd ignored the game and became increasingly hostile toward Campbell as the first period progressed.

Fans pelted Campbell with eggs and vegetables, and then someone set off a tear gas bomb.

The Forum was evacuated.

As fans poured out onto Ste-Catherine Street, the crowd turned violent. Stores within 15 blocks were looted and vandalized, causing an estimated $500,000 damage.

As Bob Hill listened to the drama unfold on his car radio, he knew he had to act fast.

Fans were furious the the Rocket had been supended.

“I went to the phone booth and I phoned my producer at CFCF and I said ‘I want to write a song about this’. He said ‘Have you got the words?’ I said ‘No, but by the time you get to the studio, you’ll have them.’”

Hill says banging out the song quickly that night was easy, because he had a brilliant flash to use an old Russian folk song as a template.

“So I already had the melody and all I had to do was to write the words to four or five verses telling the story of Maurice the Rocket Richard.”

Hill and his band recorded the song that night at CFCF radio studios, and it was played on air as soon as it was ready.

Hill says it was an instant smash.

“The switchboard lit up like a balloon, just clogged and clogged — hundreds of calls. Finally the radio station had to ask its listeners to please stop phoning, that they would announce times when it would be broadcast."

After the initial furor over the song died down, Hill negotiated with his record company about how many copies to print for sale in stores.

“The head of the record company said ‘We’ll print 1,000 copies. No Canadian record is gonna sell more than a thousand.'"

"We said, ‘We think this is gonna sell more.’ We got him to print 4,000 copies, which was unheard of for a Canadian record in those days. When it came out, it was gone from shelves in four hours.”

A couple of weeks later, as the Canadiens were still battling in the playoffs, and Richard was still serving his suspension, Hill got the idea to invite Richard onto his radio program for a performance of the song.

“I didn’t know the Rocket. I didn’t know if he would tell me to go fly a kite or whatever, but I picked up the phone and I started calling until I actually located Rocket Richard. To my surprise, he agreed to come for the modest fee of $25.”

“I called him up onstage in front of the howling audience. I sung the song with him standing right in front of me, and presented him with a copy of the record. He said, ‘Thanks Bob. Now that I’ve got the song I’ll be able to learn it and come and sing on your program.’”

Some academics and historians point to the Richard Riot as a political turning point — the beginning of Quebec's Quiet Revolution.

Hill never saw it that way.

“To me, from what I could see it was about hockey. These people were passionate about hockey, and that applied to English as well as French.”

Hill says he only met Richard one other time.

“After that fuss died down, in the next 20 years, I never saw Rocket Richard. But one afternoon, 20 years later, while I was playing indoor tennis at the Recreateque in Laval. I looked at the next court and who should be playing there but Maurice the Rocket Richard.”

“I made eye contact with him, and his face was just a stone wall face, so I thought it’s been a long time he doesn’t remember me. But at the end of the hour, he looked at me and he said, 'That’s a good song”. And then he was gone. I never saw him again.”
-CBC

Says Campbell, young man
That stick in your hand
Has put you in trouble, by gar
Though you needed five stitches
You’re too big for your britches
Just who do you think that you are

Now you’ve done this before
And you’ve made me quite sore
And although you are a great star
You’re through for the year
Do I make myself clear
Mr. Maurice the Rocket Richard