hey rosetta! - Into Your Lungs 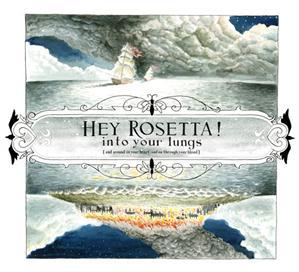 Writing a great song is an art. I don’t mean coming up with a catchy melody and a beat that gets your foot tappin’; I’m talking about a song with depth, a song with lyrics that make you think and feel, that evolves like a good movie, twisting and turning and taking you places you hadn’t imagined. And on Hey Rosetta!’s new record, Into Your Lungs (and Around in Your Heart and on Through Your Blood), singer-songwriter Tim Baker and company offer up an album full of great songs.

Into Your Lungs is Hey Rosetta!’s second full-length album, but it feels like a new start for the young Newfoundland band. Their first full-length, Plan Your Escape, was a compilation of new material and old songs from their previously released self-titled EP. Select songs from the record were later remixed and released as the Plan Your Escape EP, and while the EP was a breath of genius in today’s Indie music scene, its seven tracks left fans wanting much, much more.

Into Your Lungs gives fans what they want: an album full of energetic, well-written, wonderful songs.

But these aren’t your average verse-chorus-verse songs. Like the album’s long, parenthetical title, most tracks on Into Your Lungs begin in one place and follow a path through different sounds, instrumentations, and dynamics to reach their destination. “New Goodbye,” the opening track, begins quietly with a cautious acoustic guitar and Tim Baker’s intense voice. After a minute or so a lusciously strummed mandolin and the rest of the band join in, and an energetic electric guitar enters around the 3:30 mark. Each time a new sound enters, the song shifts in a new direction, much like plot twists or character development in a story. “Handshake the Gangster” has a similar dynamic, starting out as a slow piano-driven lament, and then smacking you in the face around 1:30 with a metric tonne of energy — a wonderful feeling that happens a whole lot on this record. And while this quiet beginning/energetic finish formula isn’t brand new, it has been perfectly implemented on Into Your Lungs.

If long songs aren’t your thing, don’t worry: the album has plenty of catchy verse-chorus-verse songs. “I’ve Been Asleep For a Long, Long Time,” “Red Heart,” and the danceable “A Thousand Suns” have all been stuck in my head on repeat since last week.

Unifying Into Your Lungs are Tim Baker’s smart, poetic lyrics and his uniquely emotive singing style. This combination is epitomized in the closing track, “Psalm,” with the chorus of “Under the night you can hear / The full moon rise like a psalm in the air / and the air goes into your lungs and around in your heart and on through your blood.” After hearing that line, the album title doesn’t seem so long anymore.

What is most impressive about this record is how perfect it sounds from a production perspective. For an album by a relatively large band with a huge range of instruments and sonorities, Into Your Lungs is unbelievably well-balanced and crisp. The band probably has producer Hawksley Workman — a national treasure — to thank for that. Hawksley has a remarkable ear for detail and is as meticulous a producer as he is a songwriter.

Into Your Lungs is the sound of one of the best young bands in Canada coming into their own. The songs are mature and brave, the sound distinctly fresh, and the energy level at an unparalleled high. Tracks that you absolutely can’t miss include “Holy Shit (What a Relief),” “There’s an Arc,” “I’ve Been Asleep for a Long, Long Time,” and “Red Heart.”
-Jake Shenker, Mondo Magazine