Henry, Len - Don't Give a Damn Kind of Man 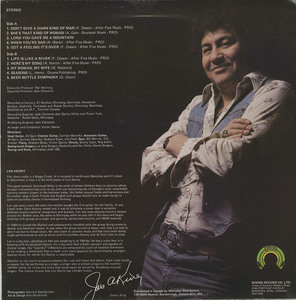 Len Henry - Don't Give a Damn Kind of Man BACK 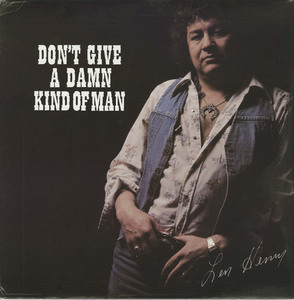 Raised in a musical family, Len Henry first performed professionally as a member of the group Burt Todd & The Firestrings, which later evolved into The Mystics, a band that played largely on the Winnipeg, Manitoba, bar scene. Len Henry then teamed-up with younger brother Harvey Henry to form The Henry Brothers Band, after which both brothers pursued solo careers in country music, with Len Henry forming the band Len Henry And Good Company.

In the late 1970's Len Henry became a favourite with the late Elizabeth "Ma" Henning, owner operator of the famed Downs Motor Hotel in Winnipeg, as well as the Downs Records Company. As Executive Producer "Ma Henning brought in Nashville's Jack Clements to oversee production of Len Henry's 1978 debut album "Don't Give A Damn Kind Of A Man" (Downs DWNS-1000). The album served up a series of single releases, including the title track (DWNS-100) and the follow-up "She's That Kind Of Woman" b/w "When You're Sad" (DWNS-101). Two other singles from the album were billed as "Len Henry & Good Company", including "Poor Man's Railroad Line" (DWNS-1008) and "Ramblin" (DWNS-110).

A second album, "Yesterday's Dreams" (Downs DWNS-81-1001) was released in 1981, this one produced in Winnipeg Studios by Craig Fotheringham. Again, several singles were pulled from the album, including the Barry Brown (of Family Brown) penned tune, "Cold Wind On The Mountain" b/w "Love Has Made A Fool Of Me Again" (DWNS-1001); followed by "Oh My Lady (DWNS-107). The next two singles were released on "Ma" Hennings new record label, Ameri-Can Records, with "What's It Like To Live In Texas" (DH-1001) and "Happy Ever After"(DH-1006), the latter proving to be Len Henry's only national chart showing, peaking at #35 on the RPM Charts in 1983.