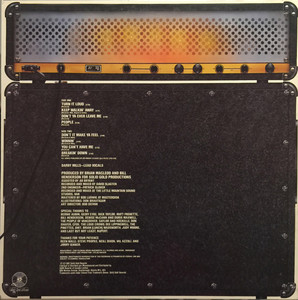 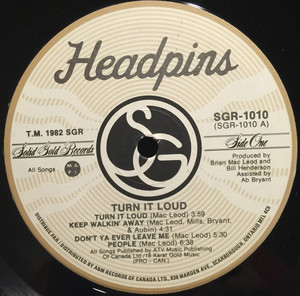 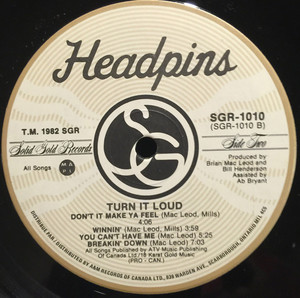 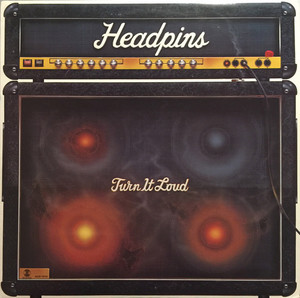 The Headpins began in 1980 as a part-time project of the multi-instrumentalist (guitar, keyboards, drums) and songwriter Brian 'Too Loud' MacLeod and the bassist Ab Bryant from Chilliwack, with the vocalist Denice McCann and the drummer Matt Frenette. McCann and Frenette were replaced, respectively, by Darby Mills and Bernie Aubin, who appeared on the Headpins' first LP, Turn It Loud (Solid Gold SGR-1010). Issued in 1982, it eventually sold some 200,000 copies and included the hit 'Don't It Make Ya Feel?'

Mills and Aubin toured with other musicians until MacLeod and Bryant left Chilliwack in April 1983 to become fulltime Headpins. The LPs Line of Fire (Solid Gold SGR-1017) and Head Over Heels (MCA 6530) followed, the former selling more than 100,000 copies. The songs 'Celebration' and 'Just One More Time' were also popular and were included on a 'greatest-hits' CD (CBS VCK-80130) in 1988.

The Headpins toured widely in Canada and appeared in the USA and, in 1984, Europe. Their concerts were dominated by the onstage abandon and screaming vocals of the inexhaustible Mills. After a Massey Hall concert, the critic Greg Quill described the Headpins' music as 'simple, concise power pop fairly dripping with sexual tension' (Toronto Star, 9 Dec 1982).

Although the band went through some later personnel changes, Mills, MacLeod and Bryant were constant until its demise in 1986 and participated in a revival, and cross-Canada nightclub tour, in 1989. MacLeod (b Halifax 25 Jun 1952, d Vancouver 25 Apr 1992) was also active as a record producer (Chicago, Chilliwack, Paul Dean, D.O.A., Doug & the Slugs, Good Brothers, Billy Newton-Davis, etc). Mills returned to notice in 1991 with a new band, the Unsung Heroes; her album Never Look Back (WEA 74423, CD and cass) included the hit 'Cry to Me'.
Originally formed by Brian MacLeod and Ab Bryant as a "side project" from Chilliwack, the group’s impact was immediate even before they had landed a record deal and they soon became one of the hottest commodities in Canadian rock.

Their first release on Solid Gold Records, "Turn It Loud", featured a title release that quickly found its place in rock history as one of Canadian rock’s greatest anthems of all time. "Don’t It Make Ya Feel", "Breakin’ Down", "People" and "Winnin’" had radio play on FM stations across the country. Shortly after the band completed their North America tour in support of the record, their debut album went platinum. It would go on to sell over a quarter-million copies in Canada alone and be certified double platinum, making it one of the most successful debut albums by a Canadian group ever.

Originally formed by Brian MacLeod and Ab Bryant as a sort of 'side project' from Chilliwack in 1980, the group's earliest beginnings included drummer Matt Frennette, ex of Streetheart and Randy Bachman's wife Denise McCann, who had enjoyed a moderately successful disco career a few years earlier on vocals. The Pins and Loverboy swapped drummers, and Frenette was gone and Bernie Aubin was in, who incidentally co-wrote Loverboy's "The Kid Is Hot Tonite".

Before the end of the year however, it was decided that McCann wasn't right for the job of translating MacLeod's musical vision and was replaced by Darby Mills, already a seasoned session worker and singer of Streetback, a group closer to what MacLeod had in mind than McCann's disco background.

They continued playing the Vancouver area and won a local radio station's 'battle of the bands' competition in 1981. CFOX's album later that year featured two of their tracks, a live version of "Breakin' Down" and "When A Man Loves a Woman", their only recorded cover. Even while still negotiatiating a record deal their impact was immediate. The band's live magnetism was rivalled by few and they soon became one of the hottest commodities on the West Coast, beginning with their first show in hometown Vancouver backing up Pat Travers and Blackmore's Rainbow.

They inked a deal with independant Solid Gold Records before year's end and went into Vancouver's Little Mountain Studios, coming out with TURN IT LOUD in the spring of 1982. Co-produced by Bill Henderson, Bryant and Macleod's Chilliwack-mate, the record allowed the Headpins to hit the scene with an experienced master behind the controls. Charged with emotions, Macleod's guitars rang predominant, almost a friendly battle with Mills' immediately signature voice. With Bryant and Aubin serving a tight powerful backbeat and beginning with the lead-off title-track, it grabbed you by the balls and refused to let go, finding its place in rock history as one of rock's greatest anthems of all time.

Mills' style became known as the growl and would go on to lead the charge in their energized live show, She was compared more to Robert Plant or David Coverdale than, say Ann Wilson or Janis Joplin. "Don't It Make Ya Feel" turned the FM stations upside down, as did the title track, backed by the killer "Breakin' Down", one person's handling his problems via suicide, and "People". Even the power ballad "Winnin'" packed a punch, but still showed Mills' range. By the time TURN IT LOUD turned platinum just a few short months later, the band had already toured most of the continent. The debut would go on to sell over a quarter-million copies in Canada alone and be certified double platinum, making it one of the most successful debut albums by a Canadian group ever. Macleod's and Bryant's prior commitments to Chilliwack allowed them to only tour part of the schedule, while Mills and Aubin carried on with replacements Darcy MacDonald on guitars and bassist Dave Reimer

After touring the majority of the planet, they returned to Little Mountain and Immediately began work on the follow-up LINE OF FIRE, released in '83. Backed by the singles, "Feel It (Feel My Body)" and "Don't Stand In The Line Of Fire", it stayed true to the course its predecessor had laid out. Other tracks included "Mine All Mine", "I Know What You're Thinking" and "Celebration", helping the album make it two straight platinum records. LINE OF FIRE not only played the same chords at varying volumes as TURN IT LOUD, but the group also showed growth and diversity with "Feel It", incorporating synthesizers as well as a horn section. An extended tour ensued, seeing the band on every major event in North America and Europe, including dates with the likes of KISS, Billy Squier, Helix, Black and Blue, Streetheart, Quiet Riot and Whitesnake.

Solid Gold Records meanwhile, was not enjoying nearly the success of The Pins, and closed its doors in early '84. Nearly two years would pass before the Headpins would emerge from the studios again. The result was HEAD OVER HEELS, released on MCA in late fall of '85. The band's typical roaring attitude with new drummer Scott Reid was alive and well, serving up a healthy dose of Macleod's blazing riffs and Mills' unmistakeable voice ringing true on "Still The One" and "Death Of Me". One of the year's sleeper hits also appeared in "You're Only Afraid Of The Dark", along with "Be With You", "Chain Gang" and the powerful "The Danger Zone". Again the band enjoyed sales of nearly 100,000 copies at home alone, making HEAD OVER HEELS their third straight album to at least reach gold.

Caught in the political 'BS' that is the record biz, the group found themselves the next year without a deal, but carried on for the next couple of years touring across North America. In 1987 MCA released ANTHOLOGY, available only in the US. CBS Records acquired the rights to the Solid Gold catalogue the next year and issued GREATEST HITS in Canada, which incidentally contains the entire TURN IT LOUD repetoire minus one track, but is void of anything from HEAD OVER HEELS due to MCA owning the rights.

In 1990 Mills' left to pursue a solo career, releasing NEVER LOOK BACK the next year. She was replaced by Chrissy Steele and the band continued playing while shopping for a new deal, despite everyone's outside interests. Settling their differences with MCA, the band returned to the studios in late 1990 to begin work on the next record. By this point Macleod's was the only remaining member of what was 'the pins'. Unfortunately though, he was diagnosed with cancer before the record was finished, and label execs decided it should be released as Steele's debut solo project instead. MAGNET TO STEELE hit the stores in the summer of '91.

The rock world mourned the loss of Brian 'Too Loud' Macleod a year later when he lost his bout with cancer. Mills, Aubin and Bryant reformed a touring version of the band that featured Vic Nicols (real name Vic Nickelichuk) and John Dryden (also a touring member of a version of Trooper around the same time) a couple of years later. People still yearned for the live magnetism only they can bring to a party.

TURN IT LOUD was re-released in late 2000 and the band was thrilled to announce the addition of new axeman Tony Dellacroce the next summer. Originally from Ontario, he's recorded with Doucette and toured with the likes of Lee Aaron, Savoy Brown, Buddy Guy, Alannah Myles, Jeff Healey, Powder Blues Band and Long John Baldry, gaining a reputation along the way across country as one of Canada's brightest young stars. Along with Alfie Galpin (guitars/keyboards), their slick, aggressive style melded with the 'Pins sheer on-stage energy.

LINE OF FIRE was re-released in 2002 followed by an all-new greatest hits package in '04, entitled coincidentally enough THE COMPLETE GREATEST HITS a year later, which included the videos for "Don't It Make You Feel" and "Just One More Time".