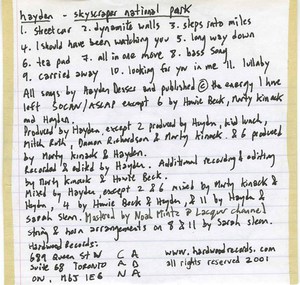 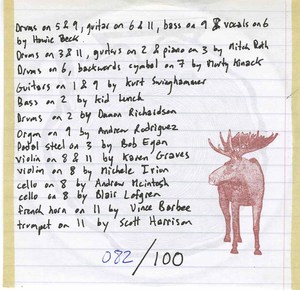 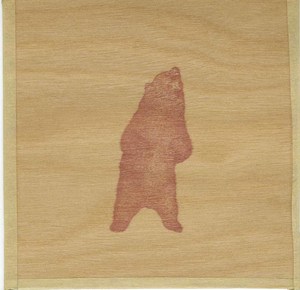 Hayden Desser's sounds of solitude have captured the ears of sad-core indie-folk fans ever since his debut LP, Everything I Long For, was released in 1996. The album, recorded on a four-track at his parent's house, was notable for its contrast of wistful tenderness and snarling anger, and of course, Hayden's striking baritone. On its follow-up, The Closer I Get, Hayden had less to growl about, but just as much to long for, finding its high points with "Two Doors" and "Between Us to Hold."

Now, after a three-year hiatus, Hayden has returned with his third LP, Skyscraper National Park. The album casts Hayden as older, wiser and more reflective. Hayden is still a man steeped in his own sensitivity, but he's changed a bit with age. Youthful, idealistic romance has grown into love, hopefulness into doubt, and anger into distance. Accompanying his maturity is a newfound and uncanny sense of restraint that both binds the disc and renders his passion haunting and compelling. Not once does Hayden burst into a growl. Instead, the album is marked by frequent reliance on a simple falsetto.

Hayden's progression is apparent from the opening chords of "Street Car," faint and filtered, with audible squeaks and shimmers of Hayden's fingers on the fretboard of his 12-string. A piano joins only on downbeats, and both play an ideal forum for Hayden's forlorn lyrics: "Parked underground the night you left/ It took me an hour and a half/ To find my way back up above/ There's nothing up there without your love."

"Dynamite Walls" is as close Hayden has come to perfecting his craft. The song features an uptempo beat (for Hayden) and a full band, dwelling on fresh, spacious instrumentation and a subdued melody, until it releases into a magnificent crescendo. The lyrics, including the chorus ("Miles away, just up ahead/ It doesn't matter just what/ Any of us is looking for/ We'll never find it because/ It's not even there") are a shockingly precise complement to the music, conjuring images of driving through open spaces and mountain air. After "Dynamite Walls," Skyscraper National Park levels into a sonic consistency of subdued melodies and sparse instrumentation.

"All in One Move" is one of cheeriest tunes on the album, so much so that it can properly be called a "tune." Not surprisingly for sad-man Hayden, at about one minute in length, it's also the shortest song on the disc. So before he manages to lift himself out of depression, he regresses into "Bass Song," featuring lyrics as genial and optimistic as, "I couldn't find shit/ So I grabbed my bass guitar by the neck/ And held it above me/ And hid by the top of the stairs and that's where I was found/ Five days after I hit the ground."

Hayden closes the album nicely with "Lullaby," less melody-focused than the rest of the album, and more akin to the mood music of such slow-core stalwarts as Low and Idaho. On it, Hayden beckons his beloved to "close your eyes and think about/ What you can't live without." The invitation is as appropriate to the listener as to his lover. It is what it says-- a lullaby-- fading peacefully into sleep.

Although its best moments don't reach quite the altitudes of his prior releases, Skyscraper National Park, as a whole, is the most complete and coherent album in Hayden's catalog, a delightful listen from track one through track eleven. The union of his established songwriting talent with his poignant maturity and restraint make Skyscraper National Park convincing, powerful, and well worth purchasing.
Brad Haywood
-limited special edition of 100 hand numbered home made wood sleeve.