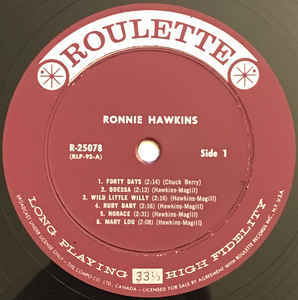 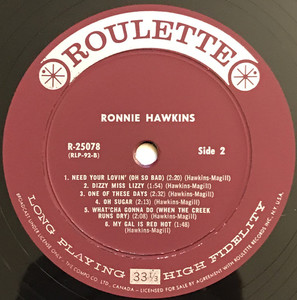 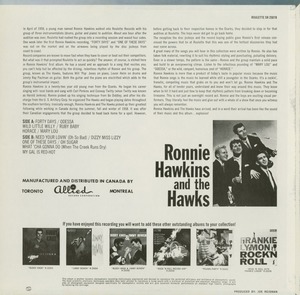 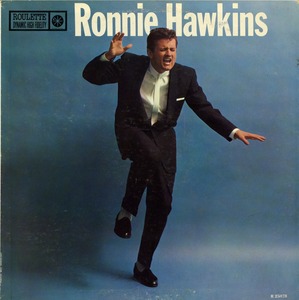 Ronnie Hawkins, the big, boisterous Southern rockabilly singer who called Canada home and helped mentor the first band from this country inducted into the Rock and Roll Hall of Fame, has died.

His wife, Wanda, confirmed to The Canadian Press that Hawkins died Sunday morning after a long illness at age 87. "He went peacefully and he looked as handsome as ever," she said in a phone interview with CP.

The musician known as The Hawk didn't make his reputation in the studio. His highest charting single in the U.S. reached No. 26, and, not a natural songwriter, most of his recorded work consisted of covers. But his stage shows were raucous affairs, characterized by his booming voice, humorous stage patter and acrobatic moves like his "camel walk."

Hawkins, born and raised in Arkansas, got wind of steady work available on the Canadian bar circuit from Conway Twitty, among others. He began touring in Ontario in 1958, and by the time he was featured in a CBC Telescope documentary nine years later, he was ensconced in Canada.

"You know, I don't know anything about Canadian politics, the price of wheat or Niagara Falls," he said in the doccumentary. "But I sure do know one thing: I sure dig it up here."

Hawkins's band over the years included musicians and performers who went on to have their own success, including Roy Buchanan, Beverly D'Angelo, David Foster, Lawrence Gowan and Pat Travers.

But it was a specific five who would cement Hawkins's reputation in music lore as an elder statesman. Rick Danko, Levon Helm, Garth Hudson, Richard Manuel and Robbie Robertson eventually left Hawkins en masse for the United States. They backed Bob Dylan and then made their own mark as the Band, with critically hailed albums and hits such as The Night They Drove Old Dixie Down, Up on Cripple Creek and The Weight.

"We should thank Ronnie Hawkins in being so instrumental in us coming together and for teaching us the 'code of the road,' so to speak," guitarist Robertson said when the Band was inducted into the Rock and Roll Hall of Fame in 1994.

For reasons that have been debated — his love of Canada undoubtedly playing a part — Hawkins couldn't fully grasp the brass ring or allow U.S. music industry heavyweights to mould his career. The larger-than-life character seemed content carving out a reputation north of the border.

"I brought the first blues here. Nobody had ever heard of Bo Diddley, Muddy Waters, B.B. [King] or anyone in Canada," he once boasted, perhaps dubiously, to music journalist Larry LeBlanc.

Hawkins, often called Rompin' Ronnie, won a Juno Award for country male vocalist of the year in 1982 and received lifetime achievement awards from both the Junos in 1996 and the Society of Composers, Authors and Music Publishers of Canada (SOCAN) in 2007. Always retaining U.S. citizenship, in 2014 he accepted an honorary appointment as officer of the Order of Canada.

As described in Helm's autobiography This Wheel's On Fire, Hawkins often had to charm a young musician's parents to fill out his band. His recruitment pitch to prospective band members was less G-rated and usually included the promise they'd get more sex "than Sinatra," though in less euphemistic terms.

Hawkins may not have sold millions, but he did well enough to reside at a sprawling multimillion-dollar property in Stoney Lake in Ontario's Kawarthas region. As recently as 2016, he was hosting longtime friends Gordon Lightfoot and Kris Kristofferson for a session at his home studio there.

His was a life filled with colourful experiences. He recorded with everyone from the great Duane Allman to The Happy Hooker author Xaviera Hollander, portrayed Bob Dylan in Dylan's widely panned film Renaldo and Clara — while also acting in another notable box office flop, Heaven's Gate — and was among the Canadian contributors to the famine benefit song Tears Are Not Enough in 1985.

John Lennon and Yoko Ono guesting at his farm during an extended Toronto stay in 1969 was a particular favourite Hawkins story. He would tell more than one CBC host over the years of a pot-smoking session that included both Lennon and Prime Minister Pierre Trudeau.

True or tall tale? One often didn't know with Hawkins, but he definitely performed at inauguration parties in Washington, D.C., in 1993 for the first U.S. president from Arkansas.

"If the world had more people like Ronnie Hawkins, we'd do less stupid things to each other, we'd hurt fewer people, we'd have a lot more laughs," Bill Clinton said in the 2004 documentary Hawkins: Still Alive and Kickin'. "I've never met another one like him."
Hawkins, left, is pictured with Kris Kristofferson in 2002, when Hawkins received a star on Canada's Walk of Fame in Toronto. (Frank Gunn/The Canadian Press)

Hawkins was born on Jan. 10, 1935, in Huntsville, Ark., his family moving to Fayetteville when he was a child. He made it to university and enlisted in the National Guard and the army, but for the most part his main interests were cars, girls and, as early as age 12, music.

Hawkins began playing in local bars in 1953, with young Arkansan Levon Helm joining the fold about five years later. In 1959, Hawkins scored a deal with Roulette Records, leading that year to minor hits Forty Days and Mary Lou and an appearance on American Bandstand.

Robbie Robertson, a 16-year-old from Toronto, joined weeks after that TV appearance. The rest of the members of what became the Band were found in southwestern Ontario in 1961-62: Rick Danko from Simcoe, Richard Manuel from Stratford and the classically trained Garth Hudson from London.

Hawkins, Helm wrote in his autobiography, "molded us into the wildest, fiercest speed-driven bar band in America."

By mid-decade, his band was chafing at Hawkins's control and the skint life of backing musicians. Hawkins also had a family life now, after meeting wife Wanda at Toronto's Concord Tavern.

"We wanted to explore a deeper musicality," Robertson told CBC in 2011. "Loved him, but we needed to go and find out what was around the corner."

Hawkins travelled to San Francisco for the live swan song of the Band's original lineup, a 1976 concert captured on screen in Martin Scorsese's iconic rock documentary The Last Waltz. Performing Who Do You Love?, Hawkins was on the bill with the likes of Dylan, Van Morrison and Canadians Neil Young and Joni Mitchell.

Hawkins enjoyed that bit of revelry and recognition, as the early 1970s hadn't always been kind. For his ever-touring band, it had been a period of much turnover. He was an avid drinker then, and those years also included a failed club venture and a marijuana possession rap.

Hawkins would eventually be feted himself at benefit shows. For his 60th birthday at Toronto's Massey Hall, performers included Danko, Helm and Hudson, as well as Sylvia Tyson and Jeff Healey. After quadruple bypass surgery in 2002, the same year he was honoured on Canada's Walk of Fame, a tribute concert featured the Tragically Hip and Tom Cochrane, among others.