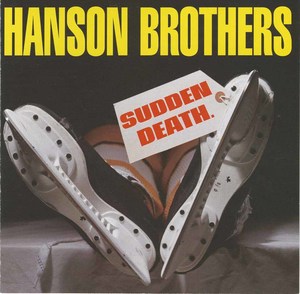 The biggest problem for a side project that was meant to be a one-off thing is that when you decide to follow up your first release, there is the inevitable sense of letdown. Hanson Brothers' first release, Gross Misconduct, was meant to be a fun little tribute to the Ramones and hockey, yet the side project for Nomeansno became a minor institution and couldn't be put to rest so easily. Four years after the initial album, the Hanson Brothers returned with another album full of odes to hockey, girls and beer brewing called Sudden Death..

With Gross Misconduct being one of my all time favorite punk records, Sudden Death had a lot to live up to and for quite some time I never was willing to let myself enjoy the CD. Although the concept of singing about hockey over a Ramones' styled formula is still quite intact, there was just something missing in the outcome. However, given a few years since I last listened to this CD, it seems that Sudden Death didn't deserve such a quick epitaph after all. Fact of the matter is that Sudden Death simply won't be as good as the debut, but it's still quite good for Ramones type of punk. Between catchy, anthemic tunes like "Danielle (She Don't Care About Hockey)" or "The Hockey Song" and the riproaring, bouncy tunes like "Rink Rat" or "Four Heads, One Brain", there's more than a few fun songs to give the CD its due respect. Singer Johnny Hanson does happen to sound a bit more like his brother Robbie (best known for losing the hockey mask and singing for Nomeansno) with a little more bass in his voice than before. Blame that on age. Besides, eventually we all want to sound like Rob Wright anyhow..

Nothing will replace my fond spot for Gross Misconduct, but I'm pleased that I gave Sudden Death a second chance. For a band that started as a lark, they've certainly become a very identifiable group that is more fun than a box of Viagra at the nursing home. "Mary Lou" will certainly be pleased to hear that..
-John Chedsey