Hannon, Beau And The Mint Juleps - Most Requested 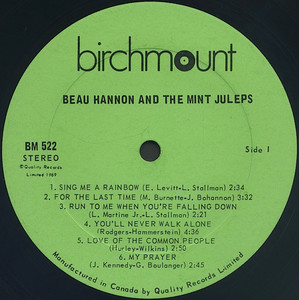 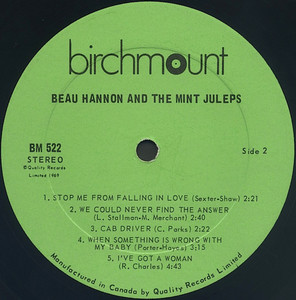 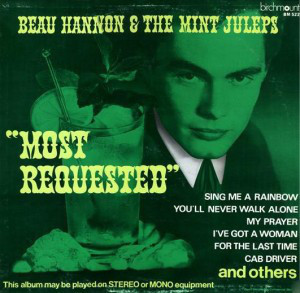 The band got together in May of 1961 and began to rehearse. The members were Jim Bohannon on vocals and rhythm guitar, Buddy Dodd on lead guitar, Larry Fite on bass, and Ken Martin on drums. Bohannon took the stage name of "Beau-Hannon" and they began to perform under the name of "Beau-Hannon and the Mint Juleps." After practicing for some months, they felt good enough to try their hand at recording. They went into Leo Castleberry's recording studio in Hot Springs, Arkansas, and there they cut the instrumental "Brainstorm." It was a Larry Fite composition which they had played previously a lot in the clubs around Hot Springs and Benton, where it was received well by the audience. Castleberry heard it and decided to put it on record together with another of the band's songs, "'It's All Over" (written by Bohannon).

Castleberry worked out an agreement with an uprising label that was also located in Hot Springs called United Southern Artists. The label released both songs in September 1961 (United Southern 5-108) and the band went out on the road that same month. Ed Williams became the manager of the band, as bassist Larry Fite remembers:

We struck out on the road in Sept of that year going to the east coast, having a manager travel with us, his name is Ed Williams. He was a great talker and talked clubs into taking us on by showing the record. We played in Mass., N. Hampshire and upper state New York whereby we were hired by 'The Black Orchid Club' in Montreal, Canada.

They remained with the Orchid for some months and while in Montreal, Bohannon and the Mint Juleps recorded another song called "The Bristol Stomp," which remained unreleased. The band intended it to be something like "The Peppermint Twist," a song that started a new dance craze.

We got to be known as the band that brought the twist to Canada. Bill Haley and the Comets were still playing in Montreal, Joey Dee and the Starlighters as well as others - the money was good in Canada.

But in the spring of 1962, Uncle Sam was calling for Fite and he went back home. He got married in May and the band broke up after only one year of existence. Fite joined the National Guard but lost contact to the other members. It seems that Beau Hannon remained in the Canada/New England area and reformed the Mint Juleps. With a completely different line-up, he played clubs and bars in Canada as well as in the US. The mid to late 1960s also saw a release of an album as well as a single record.