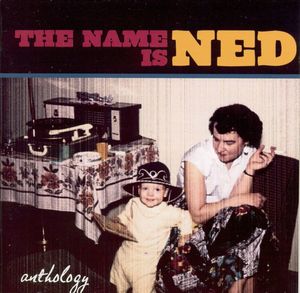 The Handsome Ned set The Name is Ned, is a welcome introduction to a nearly forgotten Canadian singer/songwriter. When Handsome Ned died in 1987 at the age of 29, he left behind a wealth of recordings, from studio tracks to live recordings and radio appearances. The Name is Ned consists of a fairly even mix of originals and covers and an impressive array of guests. For listeners looking for a taste of the kind of raw and earnest performance Handsome Ned was capable of, the live recordings hold an edge over the more polished studio tracks. However, it's the original songs that display the depth of Handsome Ned's talent. Standout tracks include "Put the Blame on Me," "That'll Be the Love," "One Hundred Miles of Open Road," and "You'll Never See Midnight." The Name is Ned is a worthy reminder of a talented Canadian artist.
-All Music Guide (4-star review)

In the 80s, Handsome Neds velvet flecked vocals ruled Toronto's Queen Street West scene. Born Robin Masyk, Handsome Ned mapped out a foundation all his own with his rich, textured rockabilly charges and honky-tonk twang, which was speckled with as much country road dust and gravel as urban grit. Ned was a Toronto fixture who typically played to packed crowds, though he unfortunately passed away in 1987 before ever releasing a full-length. But his legacy has always remained; in 1989, The Ballad of Handsome Ned was released, and in 2000, Linkhorn Music issued the double-disc The Name is Ned. As 2007 would have marked his 50 birthday, it's fitting that The Name is Ned, which had gone out of print, is being reissued, bringing Ned's plush style back to life. This is a comprehensive collection of his musical history, including live and solo recordings, favourites like "Put the Blame on Me" and "In Spite of the Danger", and recordings with the various bands he assembled throughout his career. That The Name is Ned is so massive both in sound and quantity is a testament to how prolific Ned was, though it only takes a few minutes of listening to see why some fans considered him Toronto's answer to Elvis.