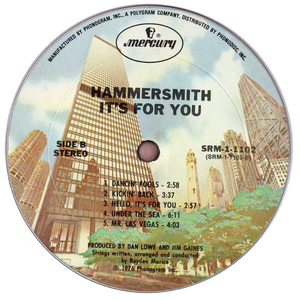 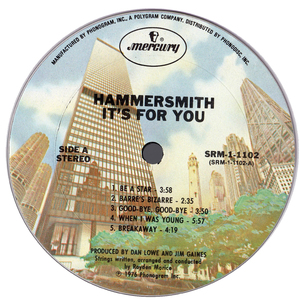 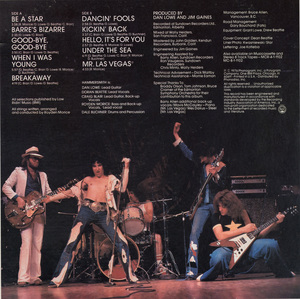 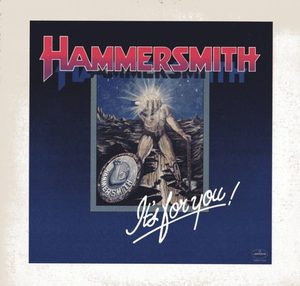 Hammersmith was the direct descendent of Painter, a Calgary-based hard rock band that had relocated to Seattle and produced one album in '74. Once Painter had played its last note in '74, Doran Beattie on lead vocals, guitarist Dan Lowe, Royden Morice on bass and keyboards and drummer Herb Ego moved back to Calgary and reinvented themselves.

They were still under contract to Mercury Records, and Bruce Allen, manager of BTO, agreed to manage them. Keeping the same harder edge to their music as their predecessor Painter, they added Jeff Boyne as a second guitarist and began touring western Canada while making stops in Sounds West Studios in Calgary and Timbre Sound in Vancouver to put some material they'd written onto tape. The bulk of these songs were written while the band was still Painter, but in the middle of the recording sessions, Ego left and was replaced behind the drum kit by James Llewellyn.

With Lowe producing, their self-titled debut came out in the summer of '75. "Late Night Lovin' Man" was released as a single, cracking the Top 40 at home. Before long "Funky As She Goes" followed suit, and they found themselves touring Canada for the rest of the year. Other noteable tracks included the cover of Rick Derringer's "Daybreak" and "Breakin' Down," the only original song Lowe didn't have a hand in writing.

By next spring Craig Blair had replaced Boyne on guitars and Llewellyn was gone and Cold Lake native Dale Buchner was the new drummer. They travelled to Sundown Recorders in Edmonton for their 1976 follow-up, IT'S FOR YOU. This time they relied on Jim Gaines, who'd worked with them when they were Painter to co-produce the album with Lowe. "Dancin' Fools" was released as a single, which failed to crack the Top 40. With the record failing to make much of an impression, Mercury had grown impatient with the band and they found themselves without a label.

Once they were off the road, Beattie quit, though the band carried on without him while searching for a new singer and a new deal. Among the people trying out for the singer position was future Moxy and Loverboy frontman Mike Reno (still going by his real name Mike Rynoski), though he didn't last long. By the end of '77 Lowe pulled the plug and everyone went on to do their own thing.

Lowe started up a new project, 451 Degrees a couple of years later, and then Prototype. In addition to becoming a successful producer, he also invented a stereo enhancement process involving multiple microphones called Q Sound, which has been used by such artists as Madonna, Sting, and Pink Floyd, as well as in cell phone technology. Beattie did some session work and became a respected country artist.
-rockasteria