Hallman, Art and His Orchestra - Turn Back the Pages of Time 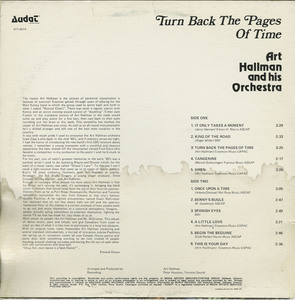 Art Hallman-Turn Back the Pages of Time BACK 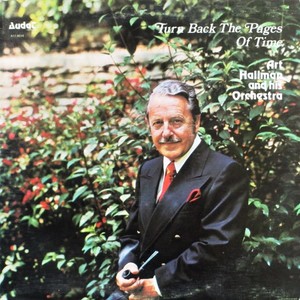 Turn Back the Pages of Time

Art (Arthur Garfield) Hallman. Singer, arranger, saxophonist, pianist, b Kitchener, Ont, 11 Jan 1910, d Richmond Hill, Ont, 5 Dec 1994. Raised in Vancouver, Hallman began studying piano at 10 and saxophone at 18, and played on CNR steamship cruises to Alaska, then on radio station CJOR. He was pianist, arranger, saxophonist, and featured vocalist 1932-45 with Mart Kenney and His Western Gentlemen, then formed his own dance band in 1945 in Toronto. It remained active for more than 45 years, working locally at Casa Loma, the Royal York Hotel, and the Palais Royale, playing for conventions and, during the 1980s and early 1990s, performing at the CNE. It also appeared elsewhere in Ontario (eg, monthly at the Jubilee Pavilion, Oshawa, for 35 years) and was featured for many years on CBC radio and during the 1950s and 1960s on CFRB's 'Sunday Night Sing-A-Long.' Hallman also wrote songs and commercial jingles; his theme song was his own 'Just A Moment More with You' (Thompson 1945). One of Canada's most popular tenors in the 1940s, Hallman also coached many of his band's female vocalists, including Terry Dale, Joan Fairfax, Shirley Harmer, and Lorraine McAllister. He also was choral director 1963-6 for CBC TV's 'Juliette', which featured the Art Hallman Singers, and appeared on other CBC TV variety shows. Fred Davis, of CBC's Front Page Challenge, originally played trumpet for Hallman.