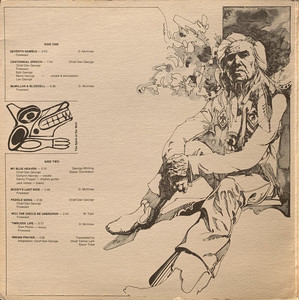 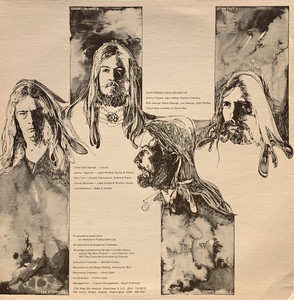 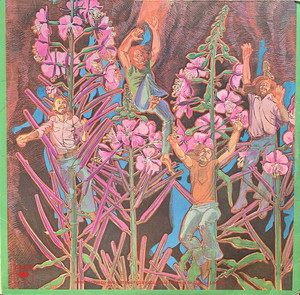 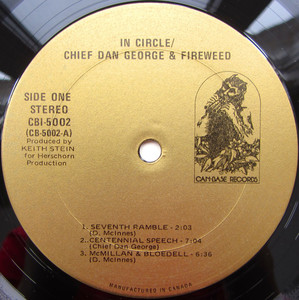 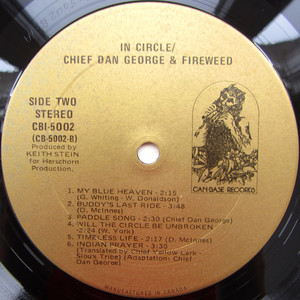 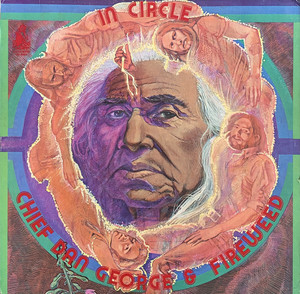 An old Redman and a band of four long-haired freaks from Vancouver, B.C., recorded the album, that was released in January 1973. Chief Dan George was also an actor who had played previously in Arthur Penn's film, "Little Big Man" (1970), featuring Dustin Hoffman, and later in Clint Eastwood's Western (Philip Kaufman co-wrote the screenplay), "The Outlaw Josey Wales" (1976). Side one includes three tracks: Seventh Ramble, a Johnny Cash influenced country-rocker; Centennial Speech, a narration by Chief Dan about Red Indian life and culture in Canada, and his destruction by the white man's invasion, followed by Indian chants; and McMillan & Bloedell, which is in the country-rock vein too, but with long psychedelic guitar solos, reminiscent of early Jerry Garcia. Side two begins with the Tin Pan Alley standard My Blue Heaven, a song with countless cover versions, from Bing Crosby to Leon Redbone. Here Chief Dan George sings backed not by Fireweed, but by Corlynn Hanney (vcls), Danny Tripper (gtr) and Jack Velker (piano). Buddy's Last Ride is an excellent rockabilly number which sounds like a fast running train, followed by Paddle Soup, a simple folky tune by Chief Dan, and a good version of the standard country number, Will The Circle Be Unbroken. Timeless Life, is bluegrass-orientated with banjo provided by Glen Pfeifer, and the last track is another narration by Chief Dan of the Sioux tribe Indian Prayer adapted in English. Tapanila had been in Painted Ship. Note: Chief Dan George sings and/or speaks only in the four tracks where his name is mentioned. On the remaining five tracks which are the best (especially the psychedelic and the rockabilly), the singer is Danny McInnes, who wrote all of them, except of course Will The Circle Be Unbroken.

The text of Chief Dan George’s speech “A Lament for Confederation:”

How long have I known you, Oh Canada? A hundred years? Yes, a hundred years. And many, many seelanum more. And today, when you celebrate your hundred years, Oh Canada, I am sad for all the Indian people throughout the land.

But in the long hundred years since the white man came, I have seen my freedom disappear like the salmon going mysteriously out to sea. The white man’s strange customs, which I could not understand, pressed down upon me until I could no longer breathe.

When I fought to protect my land and my home, I was called a savage. When I neither understood nor welcomed his way of life, I was called lazy. When I tried to rule my people, I was stripped of my authority.

My nation was ignored in your history textbooks — they were little more important in the history of Canada than the buffalo that ranged the plains. I was ridiculed in your plays and motion pictures, and when I drank your fire-water, I got drunk — very, very drunk. And I forgot.

Oh Canada, how can I celebrate with you this centenary, this hundred years? Shall I thank you for the reserves that are left to me of my beautiful forests? For the canned fish of my rivers? For the loss of my pride and authority, even among my own people? For the lack of my will to fight back? No! I must forget what’s past and gone.

Oh God in heaven! Give me back the courage of the olden chiefs. Let me wrestle with my surroundings. Let me again, as in the days of old, dominate my environment. Let me humbly accept this new culture and through it rise up and go on.

Oh God! Like the thunderbird of old I shall rise again out of the sea; I shall grab the instruments of the white man’s success — his education, his skills, and with these new tools I shall build my race into the proudest segment of your society. Before I follow the great chiefs who have gone before us, Oh Canada, I shall see these things come to pass.

I shall see our young braves and our chiefs sitting in the houses of law and government, ruling and being ruled by the knowledge and freedoms of our great land. So shall we shatter the barriers of our isolation. So shall the next hundred years be the greatest in the proud history of our tribes and nations.

In 1492, a fellow by the name of Christopher Columbus Landed on the shores of North America. When he returned back to Europe, he reported he had found a new land. And on this new land was heathans and savages. I’ll buy the word savage but I’m gonna contradict him on the word heathans. The natives of North America, north, south, east, and west, they knew of an Indian prayer, which was universal. Every tribe knew the prayer. This is the prayer: