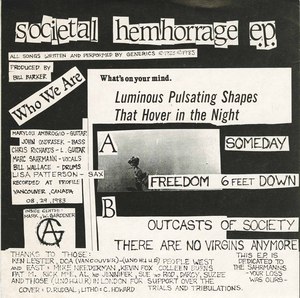 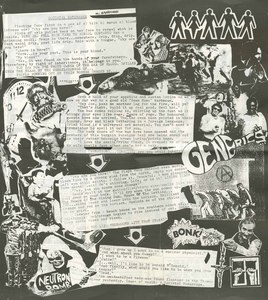 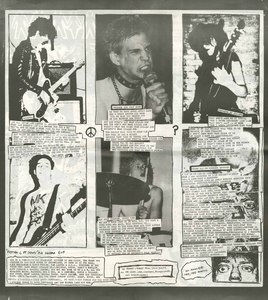 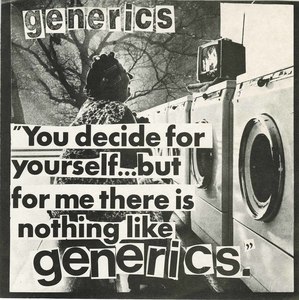 Formed September '80, first live gig a month later. Total lack of musical ability and young ages of members (average age 15) resulted in being initially ostracized by some of the more elitist members of the local punk "scene". Achieved instant local notoriety by being banned from the only remaining punk bar in the city (The Cedar Lounge) by the end of '80, after only 6 gigs. Threatened with legal action and blacklisted in attempts to organize all-ages shows, spent the better part of '81 writing new songs, becoming reasonably semi-proficient musicians, recruiting new band member (Billy, ex-Crash 80's drummer). Snuck onto the bill of an NFG gig at the Cedar Lounge in March, promptly banned again, managed to organize one all-ages show in May, otherwise unable to play locally for 7 months, so concentrated on out of town gigs until August, when another local bar (Embassy Hotel) opened it's doors to punk/hardcore. Generics were welcomed at the Embassy and became regular headliners!

Attracted increasingly large crowds, resulting in an invitation to open for The Professionals in October, which in turn resulted in an invitation to open for the Forgotten Rebels at the Cedar Lounge. The unbanning lasted only one night as Marc Sahrmann, goaded by the bar owner's son, dove off the stage and attacked him. However, the ban was finally permanently lifted by the beginning of '82. Generics split up in disgust on February 27, 1982 after a particularly discouraging gig in Toronto that involved pretentious, more-hardcore-than-thou bands, neo-nazis, & knife wielding mohicans.

Generics briefly reformed in the summer of '83 (with new bassist John Ondrasek), planned as a one-off opening for D.O.A., but extended to another show with GBH, then a headliner, and finally to a cross country tour playing shows in Winnipeg, Calgary, Vancouver. While in Vancouver, 4 songs were recorded at Profile Studio. Booked dirt cheap into the studio early one afternoon at the last minute as a favour by the studio owner to D.O.A., recorded sober and hungover, the session is not a very accurate representation of the band's sound since it was only ever intended as a demo tape to send to clubs in the U.S. who were hesitant to book bands unless they had some they sounded like. One song, "Outcasts Of Society", was only chosen at the last minute because it was going to be dropped from the setlist and it seemed a good idea to get a decent studio recording before tossing it. Needless to say, a planned released record would have been done quite a bit differently.

While on tour, the Generics' van rolled and was totalled. Marc Sahrmann was critically injured and died from his injuries after 9 months on life support. He is greatly missed.

Marc's last request regarding the Generics was that the Vancouver session be released as a 7" document that we existed, so it was, including even the song that was supposed to be dropped.