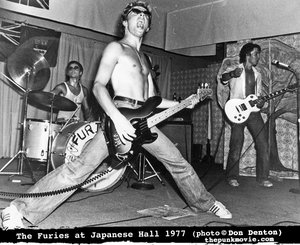 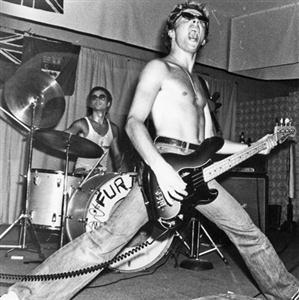 The Furies were Vancouver’s first punk band, formed by singer/guitarist Chris Arnett, drummer Jim Walker, and bassist Malcolm Hasman (later replaced by John Werner). The Furies played the first official punk concert in Vancouver at Pumps Gallery, at 40 East Cordova Street. They also played with the Dishrags on 30 July 1977, at the Japanese Hall. They were the first Vancouver punk band to make a recording (What Do You Want Me To Be? was recorded 24 June 1977, but not released until the 1991 on the Last Call compilation CD). They were the first to play out-of-town, appearing in Seattle with The Lewd in August 1977. Finally, they were also the first to call it quits, splitting up after a September Japanese Hall show with the Skulls in September 1977.

Simply stated, it was a bit too early for Vancouver to support its own punk scene. Chris Arnett decided to disband the Furies and concentrate on university. Drummer Jim Walker flew to London, England, where he landed in the hottest new band in the punk universe, John Lydon’s highly-anticipated post-Sex Pistols project, Public Image Limited. Jim appeared on their debut single and album, but left right afterwards. Back in Vancouver, Arnett returned from graduate studies abroad and formed the Shades in 1979. They recorded New Clientelle for the Vancouver Complication LP, but promptly split up.

In 2006, Arnett reconvened the original Shades as part of a concert for the reissue of the Vancouver Complication CD. Catching the performance bug again, he met up with former bandmate John Werner, who had since returned to Vancouver. In 2007, the Furies reunited (with Taylor Little replacing Jim Walker) for some concerts marking the 30th Anniversary of Punk in Vancouver, and followed that by recording a self-titled CD.

Les sez: I saw the Furies first show at Pumps Gallery, and knew that something big was going to happen. Unfortunately, it didn’t happen to the Furies. Original bassist Malcolm Hasman has gone on to become the premier realtor in ritzy West Vancouver. If you’re gonna sell out, sell out big.
read more: http://www.thepunkmovie.com/articles/furies