Forgotten Rebels - In Love With the System 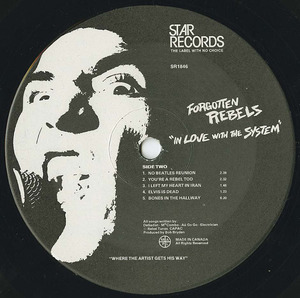 Forgotten Rebels - In Love With The System LABEL 02 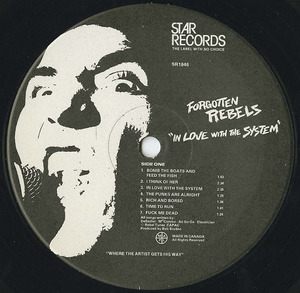 Forgotten Rebels - In Love With The System LABEL 01 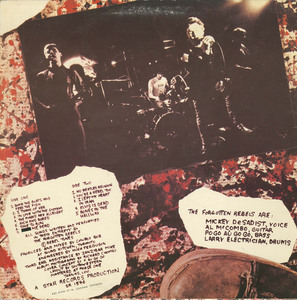 Forgotten Rebels - In Love With The System BACK 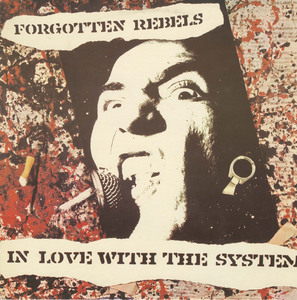 April 7, 1980: 'In Love with the System' LP cover design finished. Concept by myself and Richard Chomko. Tuesday April 29, 1980 - I am informed by Brian Simpkins, manager of Golden Records (record plant) that 3 of Toronto's printing houses will not, I repeat will NOT print The Forgotten Rebels album cover or insert because of profanity. I quote Luis Bunuel to myself: 'In a world as badly made as this one, there is only one road - rebellion.' Despite all of our efforts to convince the printers to do the job - we are 'forced' to black out the title of one of the songs on the back cover if we want the album out on time. We are working on getting a Ramones show for the area and having the Rebels open up. Wednesday, May 14, 1980 - The Forgotten Rebel 'In Love with the System' LP is released on Star Records - The Label with No Choice. Wednesday, May 21, 1980 - The Ramones come to Star Records, Hamilton for an autograph session. That night The Forgotten Rebels open up for them in Burlington. The agreement was The Rebels could open for the Ramones if they did NOT play 'I Wanna be a Nazi'. Of course, they did. Still in search of the perfect haircut. June, 1980 - I spend assuring the entire civilized world that The Forgotten Rebels are not, I repeat NOT a neo-nazi organization bent on world conquest. It starts with a gentleman who attends the Ramones/Rebels show who happens to have lost his whole family in the holocaust. He is so outrages by 'Nazis' that he call the office of the Attorney-General who proceeds to call the Burlington Police. On Wednesday June 18, I meet with Sgt Sullivan and detectives in Burlington who have an actual copy of 'In Love with the System' with insert. I assure them that these 'kids' are 'harmless' (are they really?) And that they are simply total knee-jerk reactionaries who will do anything to shock you - bur there's nothing much behind it. This seems to satisfy the police and the Attorney General BUT NOT, I REPEAT NOT CFNY. (Believe it or not - that bastion of 'alternative' music was the most offended party. Mainly because of 'Third Homosexual Murder' on the EP.) Backtracking a little - on June 10, 1980 - I had to meet with David Marsden and other staff of CFNY to assure them that The Forgotten Rebels will really not shoot you if you're gay - but that song was merely their way of 'reporting'. I still doubted we were going to get any airplay - and we didn't. It seems everybody misses that strategic verse in Mickey's song 'Nazis' where he says: 'You'd have to be quite an idiot...to believe in this mess.' (Source: Bob Bryden's website)

The song 'Elvis is Dead' was inspired by the Dutch single “We’re So Glad Elvis Is Dead” by Tits (Source: Gary Pig Gold, distributor of the single)

Bomb the Boats and Feed the Fish

I Think Of Her

[Oh] Every time I think of her, I close my eyes.
She was a velvet doll, she was a punk rocker.
When I walked off stage I fell in love with her.
[And] I stared at her from across the bar - I want her near to me.
So close and dear to me.
[And] Later that night she asked me home, so I took her home where we were all alone.

I held her tight as she clutched my hand.
(Can) [Can't] you understand? I gotta be her man.
She became special to me just in a night.
You see the dreams we (have) [shared], [and] the dreams we (shared) [have].
Then for awhile, for about a week we played a silly adult game of hide and seek.
But now I gotta have that girl to (be with me forever) [hold me tight forever]. Baby!