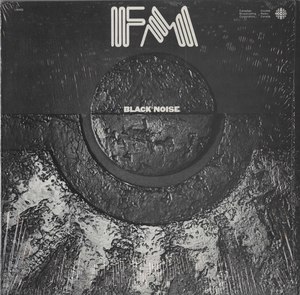 Considering the lack of available re-issues of their recorded output, one might think that the initials of Toronto prog-rock band FM stood for Forgotten Music.

Formed as a duo by Cameron Hawkins (keys, bass, vocals) and Nash The Slash (electric violin/mandolin, vocals) in 1976, the band’s concert debut took place at the A Space gallery in November. Further experimentation and collaboration led to Martin Deller joining on drums.

An award-winning live performance on TV Ontario’s Nightmusic (which featured future radio staple, Phasors On Stun), led to a record deal with CBC – which was odd because CBC’s record label concentrated almost exclusively on classical recordings. With a reported $10,000 budget, CBC producer Keith Whiting co-ordinated the sessions that would become Black Noise [1977]. The CBC label pressed 500 albums and released them to affiliates and also through their mail-order catalog.

When a distribution deal was nowhere in the making (apparently the record was shopped to every major label in Canada), Nash left to start his own Cut-Throat label and pursue a solo career. This left Hawkins and Deller with a yet-to-be-released album they could not tour.

Apparently satisfied with the artistic outcome of Black Noise, CBC approached Hawkins and Deller for an experimental follow-up in a limited issue direct-to-disc project that would become Head Room [1978]. Session player Ben Mink (formerly of Stringband and Murray McLauchlan’s Silver Tractors) replaced Nash on electric violin/mandolin in the middle of the recording session, and suddenly FM was happening again.

Shopping Black Noise in the U.S. led to a deal with Visa/Passport, with distribution by GRT in Canada. Phasors on Stun became a hit, the album went gold, and the band was handed their award at a landmark concert at the former Ontario Place Forum (now called the insert-popular-beer-brand-name-here Amphitheatre) in August 1978.

With a hit single and a new following, work began on Surveillance [1979], with Ben Mink as Nash The Slash’s full-time replacement. One week before the album’s release their Canadian distributor, GRT, declared bankruptcy and Visa/Passport filed a claim that it, and FM, never received royalties due from Canadian sales of Black Noise.

The distribution license for Black Noise then began to bounce around, being picked up by Capitol, then A&M, and eventually MCA.

With prog-rock in decline, FM would begin its move to a more vocal-oriented sound, and their first offering in this direction was the harder-edged City of Fear – perhaps the best attempt by the band to break into a more conventional radio market, while still retaining their progressive sound.

But before FM could tour, Passport went bankrupt. Ben Mink took this as his cue to exit, returning to session work (he appeared on Rush’s Signals), eventually joining K.D. Lang’s outfit. Deller and Hawkins called it quits until the success of Nash led to a 1985 reunion and an album on Quality records called Con-Test.

The single Just Like You became a hit and FM seemed to be off to the races again until, you guessed it – Quality decided to axe its recording division. MCA took the reigns and re-issued Con-Test, but the momentum was lost, and Deller split to spend more time with his family.

Simon Brierley (Lee Aaron/Strange Advance) and drummer Greg Critchley (Partland Bros./Spoons) joined for the next album Tonight [1987], to be released under a new deal with Duke Street, with MCA doing distribution. By 1989 it was all over.

Considering the ongoing radio play of Phasors on Stun and Just Like You, one would expect to see some kind of CD re-issue of FM’s material, but a fire at the Passport master tape vaults took care of that possibility.

It’s really a shame. City of Fear is probably one of the most interesting Canadian albums of 1980. Despite a lack of critical acclaim, Surveilance is a solid offering, and Head Room is positively astounding. With all the resurgence of analog electronica, one would think ths album would be re-mastered from an early pressing – perhaps sitting in a vault somewhere?

Hawkins would later re-master Black Noise from a near-mint copy of the original CBC vinyl issue and release it on CD on his Now See Hear label in 1994, with distribution by MCA (Canada), and One Way (USA). Finally the band was able to make a little money from a record it made 17 years before. I am not sure if this CD is still available, but it is well worth seeking out.

Sadly, none of the other albums have ever been re-issued in any format, but you can easily find original LP copies in record stores in Toronto and around southern Ontario.
-Richard Rice