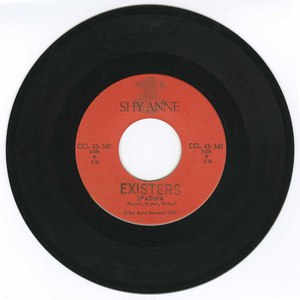 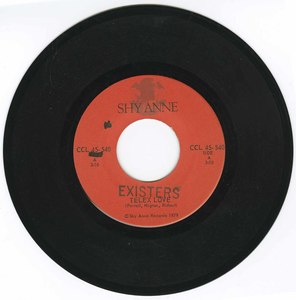 Among the multitude of bands that flowered too briefly in Toronto in the formative late 70’s punk scene, the Existers stand out as the band that was perhaps most promising of all. When they disbanded in 1980, after three busy years together, it left a gap for many who had come to appreciate the excitement and challenge of an Existers show and who looked forward to much more from the band in the future. The Existers only ever made one record. It was a 45 disk that included two showstoppers: “Telex Love”, the manic cry of someone drowning in technology, and “Spadina”, a lament for fleeting happiness. Although hatched in the foment of punk’s breakout in North America and though always tough and powerful, Existers music also gathered up other influences. The songwriting was tuneful and committed, as we expect it to be from Canadian songwriters. Complex guitar soloing, even a nod to psychedelics, served as crucial extensions of many of the songs’ narratives. What also packed the bars and clubs wherever and whenever the Existers appeared was the certainty you were going to enjoy some firebrand Toronto showmanship of the old school. Every show the Existers gave –and they gave hundreds in a three year period– was played as though it would be their last. Passion, commitment and belief was what the Existers delivered night after night. Soon enough the pressures mounted. Torn by conflicting visions, by competing obligations, spiritually exhausted, the band simply expired on the road one weekend, out of gas. It might have been wise if they’d simply taken a break and gone back into it reenergized, but they were young and proud and, anyway, all of them continued in music in other groups. (There’s never any shortage of work for rockers in Toronto.) Scott Chapley, Barrie Farrell, Denis Ridout, George Higton, ChipYarwood. All still alive and all still kicking and all making challenging music with no looking back needed. Pioneering Exister Stephen ‘Baby Oil’ Hall, legend manque, didn’t make it to the end with the band nor even to the end of the 20th century. In 2007 the Existers were asked by Greg Dick to re-form in order to play a live radio concert on his station, CIUT Radio in Toronto, prompted by a rising legend among a newer generation about a great Toronto band that once, in a special time, was amazing. Dubious at first, all the Existers were finally persuaded to play as a band again. In uncovering their past the band was startled to hear how fresh and relevant the old material sounded. More jam-packed shows followed at the hallowed Horseshoe Tavern and then, truly thirty years too late, album sessions to lay down the mojo. Rediscovered, Existers music is lyrical but muscular. It marries punk with metal in a menage with William Blake. And the Existers still know how to kick it out with showmanship and style, teaching new audiences old truths, offering spectacle, spirit, dimension.