Eudoxis - Attack from Above (EP) 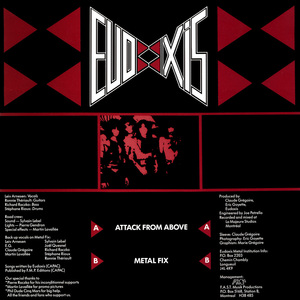 Eudoxis - Attack from Above back 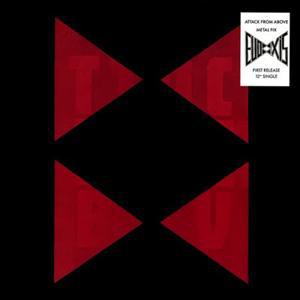 Attack from Above (EP)

Second release by Canadian thrash metal pioneers Eudoxis. Only 1000 copies of this vinyl record are in circulation. This two-song EP was released in 1986, one year after their demo and video for the song "Metal Fix" which received regular airplay on MuchMusic's "Power Hour". A more polished version of "Metal Fix" appears on side 2. Side 1 features the title track "Attack from Above". This record sold out through after show sales and worldwide mail orders. It is frequently seen on want lists and internet auctions. Rick "Raz" Raczko (bass) and Stephane Rioux (drums) founded Eudoxis in 1984 and they appear on this record. Leiv Arnesen (vocals) and Ronnie Theriault (guitars) were replaced in 1989 by singer/songwriter Sotiri Papafylis and ex-Axewraith guitarist Mars B. Alexander.

A short acoustic intro, a siren - then hell breaks loose! "Attack from Above" and "Metal Fix" are two brilliant Power/Thrash songs with excellent riffing and massive doublebass drumming. Together with the powerful production, Eudoxis have left us with a real classic that should be on your want list!"
-Metalpage

Yezz!! Arnesen is everything you could ask from a Metal singer, delivering every line with conviction, spit and spite - something we don't get to hear too often from a French-Canadian vocalist. It's hardly a coincidence that "Attack From Above" sound like a B52 bomber going in for the kill. Those motor-like leads couldn't have inspired much else than tales of flying machines of war rushing towards the enemy capitol (that would be L.A.). Yes, this is fuckin' 1st grade MILITANT Metal perfect for terrorist actions against wimps and posers. The production is superb! The massive drums will carpet-bomb your stereo into the floor and the razor sharp chugging guitars will bite your head off before you get a chance to regroup. Nothing extra-ordinary as far as originality or songstructure goes, but the sheer power of this recording proves yet again where the emphasis should lie when creating the music of Metal. No need to critisize the haunting resemblance to METALLICA's "Whiplash" at times, when this song is so much better. "Metal Fix" follows pretty much the same recipe - hammering leads, 'Metal Rules!' lyrics (like we needed reminding) and pissed-off, screaming vocals - each component would make PILEDRIVER real proud. Frankly the only minor flaw of this EP is the awful sleeve. I'm sorry, but abstract cubism is just NOT METAL! A "Bomber" rip-off would have been more appropriate.

As far as sheer bite and heaviness goes they're worthy competitors of countrymen like EXCITER and RAZOR. Too bad it took them 5 more years to prove themselves on a full-length album.
-thecorroseum.com