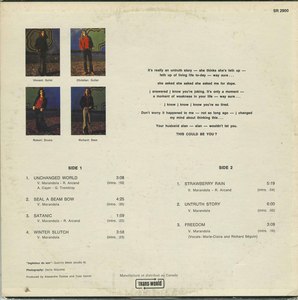 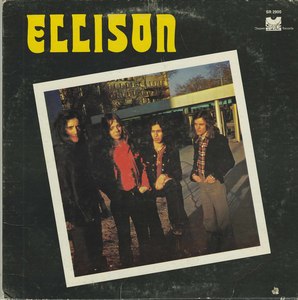 Ellison was an English Canadian Band from Montreal Québec. The band was originally formed in 1967 as "Jimmy Peace", around the talents of vocalist/guitarist Vincent Marandola and bass player Richard Arcand. In 1969, drummer Robert Cager and guitarist Christian Tremblay joined and the name was changed to Ellison.

In 1971 the band released an excellent hard rock styled album on the independent and highly collectable Trans-World label. Mainly selling in the province of Québec and Ontario, the album had only a limited release and quickly disappeared as did the band itself. The self titled album featured seven original songs that have been described as brash, loud, hard rock with straight from the heart vocal work. In a similar style as Canadian cohorts The Ugly Ducklings, The Haunted or the Sinners, Ellison has become one of the most sought after Canadian band albums.

Considered an R4 by Vernon Joynson & R4 by Hans Pokora