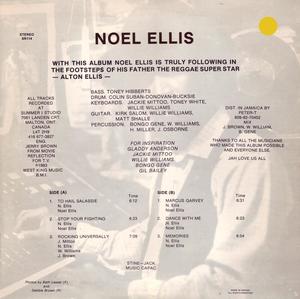 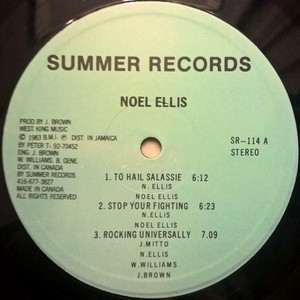 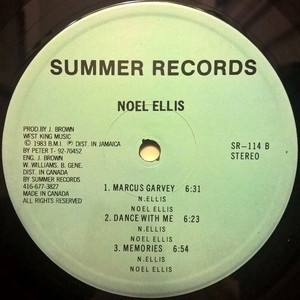 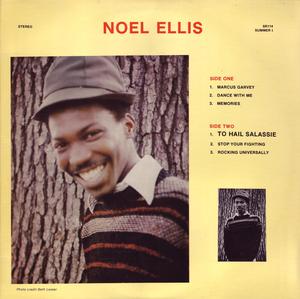 Noel is the son of legendary Studio One/Treasure Isle recording artist Alton Ellis, and this self-titled debut was recorded in Toronto in 1979 by studio wizard Jerry Brown for the pioneering Summer Records - often cited as Canada’s answer to Lee Perry’s Black Ark Studios. This latest platter serves as the third release in the Jamaica to Toronto seven album series; following Wayne McGhie & The Sounds Of Joy (1970), and the recently released deluxe anthology Jamaica to Toronto: Soul Funk & Reggae 1967-74.

Noel Ellis features six dub-loved, heavy yet ethereal tracks, with contributions from OG reggae maestros Jackie Mittoo, Willi Williams, and Johnny Osbourne. The eponymous classic lost full-length includes the hugely influential Rocking Universally, whose rhythmic influence was Willi Williams' Armagideon Time (covered by The Clash). The poignantly autobiographical “Memories” (about Noel’s upbringing in Jamaica) is a highpoint as well. “Stop Your Fighting” was a universal anti-materialism/war plea that we should still heed today, while “Marcus Garvey” was delivered in Noel’s playful style, despite a solemn rallying cry of “Africa it must be free.”

Born in 1958 in Kingston, Jamaica, Noel Ellis spent his early childhood in that city's infamous Trenchtown district. The son of reggae-soul singer Alton Ellis, the younger Ellis turned out to have a pretty good voice of his own, and even recorded an unreleased song, "It Has Been a Long Time," backed by the Gladiators, at Channel One while he was still a teenager. Alton left Jamaica and relocated to Toronto, and Noel eventually joined his father there, but soon after Noel's arrival, Alton moved on to England, where he had a significant fan base, and Noel stayed on in Toronto with his aunt and uncle, attending Castle Frank High School. Luckily, Toronto had a lively West Indian population and several record shops that catered to the émigré market, so Ellis was able to keep up on the latest 45s from Jamaica. Toronto developed its own nascent reggae scene by the mid-'70s, much of it based around Jerry Brown's Summer Records.

Recognizing Ellis' talent, Brown released Noel's "Reach My Destiny" as one side of a split disco 45 in 1978. The song didn't generate much interest, but 1979's "Rocking Universally," recorded at Summer with help from Jackie Mittoo, did, even charting in Europe as a 12" single. Four years later, in 1983, Summer released a full-length album by Ellis, simply called Noel Ellis, which featured "Rocking Universally" and five other solid roots reggae tracks in extended versions. The album didn't achieve any commercial success at the time, but has since become somewhat of a lost cult classic. Ellis left Summer and began working a series of odd jobs to support himself, occasionally tracking sides for small independent labels, eventually relocating, like his father, to London. Seattle's Light in the Attic Records rescued the excellent Noel Ellis LP from obscurity in 2006 when the label reissued it on CD.
-Steve Leggett, All Music Guide