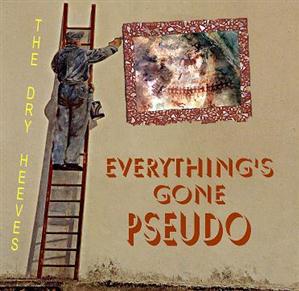 Everything’s Gone Pseudo has been a labour of love for over a decade. Many of the original ideas were first conceived in the heady days of the early Centre For Art Tapes recording sessions (Halifax 1986), and are only now seeing the light of laser, after years of incubation, creation, alteration and experimentation.

The Dry Heeves from Eastern Canada brings a delightful array of cross genre styles of music all bundled up into this one bizarre, but unique CD. The first few listen throughs I didn't really enjoy the style of electronic versus rock versus sample clips versus tribal/jungle abstract style of music. However the more you listen to this CD the more good qualities come out of it. I find myself enjoying it much more now than I did when I first started listening to it. Its not particularly the type of music I enjoy, but I don't mind it in comparison to some of the electronic atmospheric styles of music I usually get. The tracks have a way of sneaking into your brain and getting stuck in there for days on end! There's so many different styles of music on this CD that I don't really know which tracks I enjoy the most - they all have their unique differences making it hard to pinpoint a good track from a not so good track! With 18 tracks total, I'd say the songs that stuck out the most were "Meat Cove," and "Lokum." I'd recommend this album to those that enjoy unusual sounding music and that aren't afraid to venture off into a world of a variety of sounds and soundscapes.
-Wednesday Elektra
Space Junkies Magazine (May 2003)

When I first threw this CD on I was scared of what I was going to find because quite frankly the artwork looked pretty hurting. It was really hard to tell what type of band/music I was about to subject myself to and not being familiar with the band I was a little worried. Well, let me tell you, I was pleasantly surprised when I finally did get a chance to listen to this baby. Influences from all types of music from all corners of the world. I especially liked the more aggressive tracks such as “Meat Cove” and “Lokum”. I do have 1 very small beef with this release, well o.k. two but that’s it. I find that at time the CD lags and that the choice of opening songs was not good but trust me these are very minor points. Overall I really enjoyed this CD and look forward to hearing more from the band.
-Canadian-Music.com (April 2003)

One minute you have ambient soundscapes with sounds of birds, oceans, and strings, then you're listening to heavy distorted guitar. The next track has hand drums, tablas, congas, fiddle, bagpipes. With 18 tracks consuming over an hour and 13 minutes of pop, rock, techno, electronica, industrial, and folk, Everything's Gone Pseudo is quite a bargain. It's receiving airplay in Germany, Iceland, and throughout Canada. I give it 4 stars and throw it into my collection of CDs I will actually listen to.
-Darren Gallop