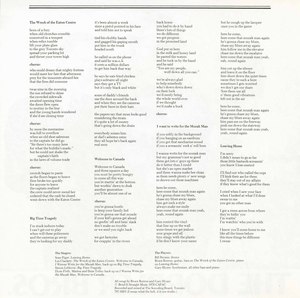 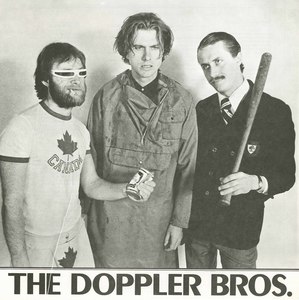 I can't find anything online about the satirical rock group The Doppler Brothers, but fortunately the liner notes (is that a great band photo or what?) identify the band members; Bill Bryans (drums), Bruce Barron (guitar, bass on "The Wreck of The Eaton Centre" and piano on "Leaving Home") and Gary Hynes (synthesizer, all other bass and piano). Lyrically the Dopplers were pretty punk rock, but musically the record has more in common with Stage Fright-era The Band or The Rheostatics (who didn't exist when it was released, but still).

This EP, named Totally Impractical, was recorded in 1978 at The Sounding Board in Toronto (apparently the band's personal studio) and released by Bend It Straight Music. The singers were Sean Pigot ("Leaving Home"), Les Clackett ("The Wreck of The Eaton Centre, "Welcome To Canada" and "I Wanna Write For The Muzak Man") and Simon Leblovik ("Big Time Tragedy"), with Dyan Firth, Marion Tobin and Ilene Tobin doing backup duty on "Canada" and "Muzak." "The Wreck Of The Eaton Centre" is, of course, a parody of the Gordon Lightfoot standard "The Wreck Of The Edmund Fitzgerald", while "Welcome To Canada" is a dig at the idealized vision of Canada as a haven for immigrants ("We're always glad to help somebody who's down down down on their luck/We'd surely bring the whole world over if we thought we'd make a buck"). "I Want To Write For The Muzak Man" takes on the easy-listening industry, and "Leaving Home" is a chilling satire of romantic ballads written from the viewpoint of a wife beater.
-Beau