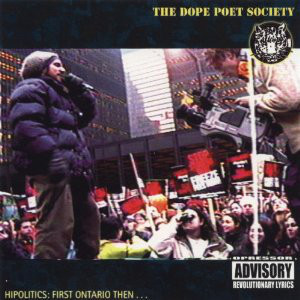 Highly acclaimed as Canada's most controversial and political recording ever, Hipolitics is one of a kind. The notorious track, Fuck Mike Harris! (the Premier of Ontario), boasts a heavy beat, classic voice samples, and superb writing and delivery. The greatest MCs are those that truly represent; and there exists no better example than this song, on which D succeeds in encapsulating the concerns and frustrations of hundreds of thousands of Ontarians. Above all, the analysis and criticism is clear, concise and accurate. The second single, I.D. (Certified B-Boy), is a certified classic, an example of how prophetic MCs can be. Two days after writing this song, D received a call from John Clark, head of OCAP (Ontario Coalition Against Poverty). Mr. Clark asked The Dope Poet Society to perform at a protest against the Government's new policy to have banks fingerprint (or fingerscan) welfare recipients. Although this was the first D had heard of the new policy, his two day old song warned:

"Be it a bank card, fingerprint or microchip,
big brother banker's got your states at his fingertips."

The CD also includes the underground favorite, The Professional, and the unorthodox posse cut, Block'a' Shot (Wonder Woman), which features the lyrical styling of Danhiq, the twisted mind of Christ, and the cool delivery of Black Raven, as well as a sweet chorus courtesy of Natalie.

This CD is a must have.

Protest songs that give people hope, strength and help to spread important information, have a long deep-rooted history. As the evolutionary descendant of music rooted in peoples struggles, hip-hop is the most recent and advanced manifestation of that tradition. Never (in recent history) has there been a form of music which could pack as much information in a song as hip-hop can today. While taking full advantage of this unique feature, The Dope Poet Society continues the tradition of word sound power set to innovative music.

All songs written, produced, arranged and mixed by D. Sajnani for
The Dope Poet Society, except tracks 1 and 5,
co-produced by Erin Camp for Let's Go Camping Productions
with additional arrangement and cuts by Nick Todorovski for
Niggasinyoface Productions, and track 4 produced by
Ron Charlemagne for On Point Enterprises
with additional lyrics written by featured artists.
Recorded at Grooveline Studios,
15 Ossington Avenue
Toronto, Ontario
M6J 2Y8
by Jason Boucher and Natalie Newell
Mastered by Monger himself at Monger's Crib