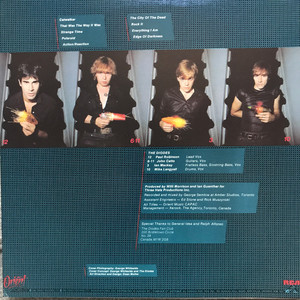 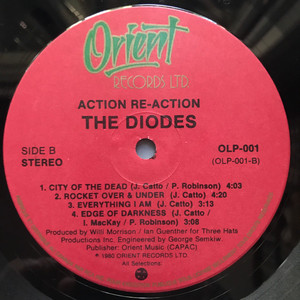 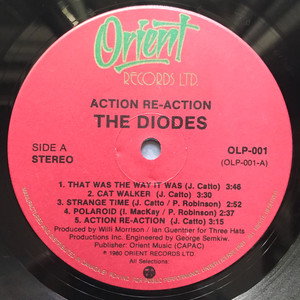 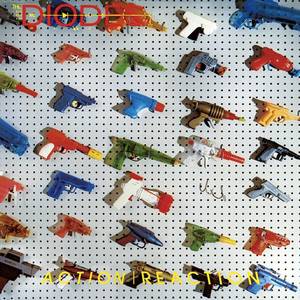 The Diodes were the ground zero of the 1977 Toronto punk explosion, running Canada’s first punk club, The Crash’n’Burn and the first Canadian punk band signed to a major label, CBS, with their debut album released worldwide in the fall of 1977, ahead of the Sex Pistols and many of their UK and US peers. After two albums on CBS and two hits (Red Rubber Ball and Tired Of Waking Up Tired), The Diodes re-grouped with a new drummer in 1979 and re-emerged in 1980 with a harder, gigantic guitar-driven rock groove that took their pop sensibilities from AM to AOR radio with the instantly infectious hit, Catwalker.

As a hard touring road band, The Diodes racked up the miles across Canada (opening tours for U2, Split Enz, Ultravox, Gary Numan, and others) and into the US (their West Coast adventures included headlining The Whiskey A Go Go, Kim Fowley, Rodney Bingenheimer, and, oh yeah, a bit of a riot at the Hong Kong Cafe in LA).

Action Reaction debuted in October, 1980, the first release on the Orient Records label, run by indie producers Willi Morrison and Ian Guenther; who had worked with Casablanca Records in addition to dance (THP Orchestra), rock (Emigre), and the cult classic debut by Thor. It was recorded at Amber Studios on Queen St, Toronto, a facility owned by renowned engineer George Semkiw (Lou Reed, BTO, Funkadelic, etc). The rights are now owned by Bongo Beat.

The lead single, Strange Time, became the group’s first hit and made the legendary CHUM-AM playlist. But it was the second single, Catwalker, that broke all the barriers, as it roared onto AOR radio nationwide; becoming an instant classic alongside Tired of Waking Up Tired. As we re-assess Action Reaction - it’s important to realize how relevant it feels today, and how ground-breaking and pioneering this album really was.

The third album from Toronto's The Diodes got a lovely CD reissue courtesy Bongo Beat a few years ago, but the original 1980 vinyl version is still the only vinyl edition of this essential, often overlooked gem of Canadian punk and rock'n'roll. From the super catchy title track to the utterly infectious Catwalker, to the perfect rock swagger of Rock It Over and Under, this is an album that needs to be experienced on vinyl.

Owing as much to the stripped-down immediacy of punk as to the brawny tunefulness of their friendly countrymen in Bachman-Turner Overdrive, the Canadian group the Diodes sure have a knack for blood-pumping rock ‘n’ roll. Capturing the one-time punk rockers’ transition to full-on AOR hard rock, the 1980 LP Action/Reaction (reissued by Bongo Beat with six bonus tracks) is a nonstop parade of virile mid-tempo guitar-crunch that’ll have you wishing the record was packaged with a leather jacket and a bottle of beer. No question, the album is at its most gratifying when the Diodes refrain from the impulse to slip into New Wave pop rock and instead emphasize those swaggering grooves. The few distracting period touches here and there, like the keyboards on “That Was the Way It Was” and the overly-treated drumbeat of “Catwalker” (an admittedly infectious single that smacks of a hypothetical union between Adam Ant and the J. Geils Band) are a small yet bearable price to pay for such a satiating helping of attitude-packed rock.
-AJ Ramirez, Pop Matters