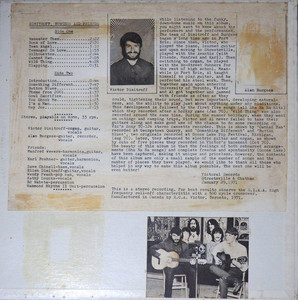 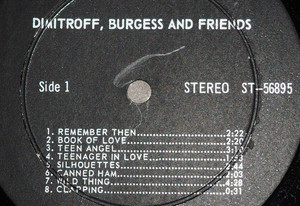 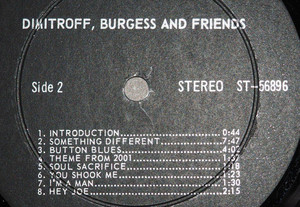 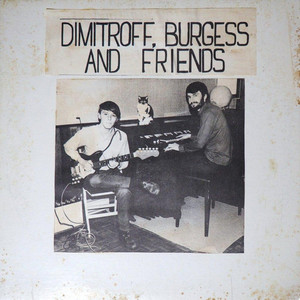 liner notes:
While listening to the funky, down-home music on this album, you might want to know about the performers and the performances. The team of Dimitroff and Burgess began a long time ago in Fort Erie. Since then, Victor, who played the piano, learned guitar and upon moving to Streetsville, played with the Avantis (with friends, Manfred and Karl). Then switching to organ, he played with the Bo-Street Runners for the rest of high school. Meanwhile in Fort Erie, Al taught himself to play guitar, and he perfected his steel work. Then, together again upon entering University of Toronto, Victor and Al got together and jammed with friends as often as they could, tightening their sound, but more important, developing natural-ness, and the ability to play just about anything under any conditions. This development is followed by the first five songs (all Sha Na Na hits) which they recorded after a hockey game (Jan '70). 'Wild Thing' was also recorded around the same time.

During the summer holidays, when they went on outings and camping trips, Victor and Al never failed to take their guitars along and make good use of the chance to do some recording on Vic's Sony TC-124 stereo cassette recorder. This is shown by 'Canned Ham', recorded at Georgetown Quarry, and 'Something Different' and 'Button Blues', two originals recorded at Goose Lake Pop Festival, Michigan (Aug '70).

Later, they advanced to electric guitar and organ, as shown by cuts of five pieces they recorded in Victor's basement (Oct '70). The beauty of this album is that the feelings of both rehearsed arrangements (Sha Na Na songs) and complete freedom and spontaneity (Goose Lake) have been captured, making it unique and priceless. However, the contents of this album are only a small sample of the number of songs and the number of places they have played. We would like to thank all of those who helped in any way to make this album possible. The next one will be even better!
-Victoral Records, Streetsville & Chatham, January 29, 1971