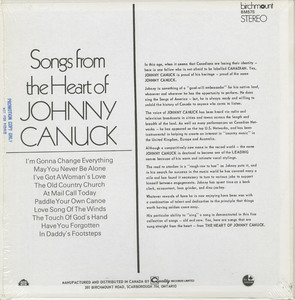 Johnny Canuck-Songs From The Heart Of BACK 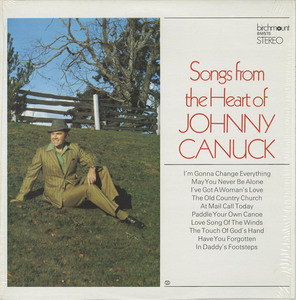 Songs from the Heart of Johnny Canuck

Johnny Canuck, the musician (not to be confused with the Canadian comic super-hero), was the alias of David Stuart (aka Stu Davis). Stu recorded this album in 1970 on another fine Canadian label, Birchmount. The back of the album say it best:

"In this age, when it seems that Canadians are losing their identity – here is one fellow who is not afraid to be labeled CANADIAN. Yes, JOHNNY CANUCK is proud of his heritage – proud of the name JOHNNY CANUCK. Johnny is something of a “good-will ambassador” for his native land, whenever and wherever he has the opportunity to perform. He does sing the Songs of America – but he is always ready and willing to unfold the history of Canada to anyone who cares to listen.The voice of JOHNNY CANUCK has been heard via radio and television broadcasts in cities and towns across the length and breadth of the land. As well as many appearances on Canadian Networks – he has appeared on the top U.S. Networks, and has been instrumental in helping to create an interest in “country music” in the United Kingdom, Europe and Australia.Although a comparatively new name in the record world – the name JOHNNY CANUCK is destined to become one of the LEADING names because of his warm and intimate vocal stylings. The road to stardom is a “rough row to hoe” as Johnny puts it, and in his search for success in the music world he has covered many a mile and has found it necessary to turn to various jobs to support himself between engagements. Johnny has spent time as a bank clerk, accountant, lens grinder, and disc jockey.Whatever rewards of fame he is now enjoying have been won with a combination of talent and dedication to the principle that things worth having seldom come easy.Hi particular ability to “sing” a song is demonstrated in this fine collection of songs – old and new. Yes, here are songs that are sung straight from the heart – from THE HEART OF JOHNNY CANUCK."