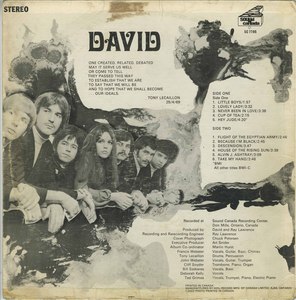 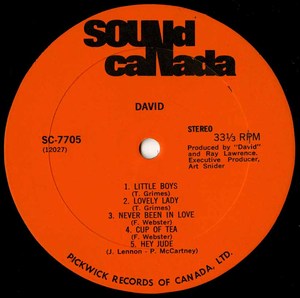 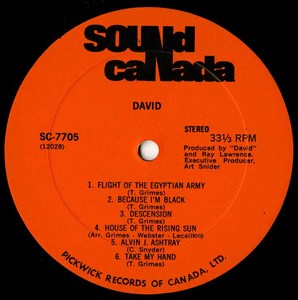 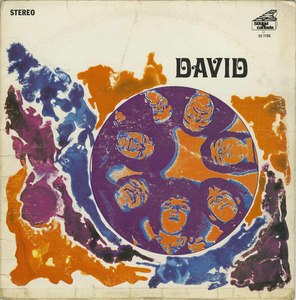 From the same label that gave us Rockadrome comes the six-man, one-woman David. Their sole album is one of those wonderful, flawed surprises from the era, an overreaching blend of orchestral pop with light psychedelic and soul touches that doesn't quite come together, yet is full of exquisite music nonetheless. The band started to take shape around 1966 when the Webster brothers, Francis and John, relocated to Toronto from nearby Collingwood, ON and hooked up with remaining members Chuck Petersen, Tony Lecaillon, Cliff Snyder, Bill Szekeres, Deborah Kelly, and Ted Grimes. By 1967, the group, still operating as the Marcatos, was purportedly drawing sizable crowds throughout the Toronto area. With a name change the following year to a more contemporary-sounding David, the band was ready to hit the studios.

Recorded at Toronto’s Sound Canada Recording Centre, David is a mix of late sixties top-forty and psychedelia with an even blend of UK and US influences. The songwriting is a mixed lot of varying calibre, but the finest songs — and those make up at least half the album — are truly stellar. The two Francis Webster contributions are highlights. ‘Never Been in Love’ is moody, psych-tinged folk-rock, with gorgeous production and ethereal harmonies that descend into quasi-medieval gothic chants, which when mixed with the track's prominent trumpet are goose pimple-inducing. And his romantic, country-picked ‘Cup of Tea’ sounds not unlike Paul McCartney's more sentimental, acoustic efforts. The soul-inflected horns throughout the record seem in retrospect almost a harbinger for the likes of Blood Sweat and Tears, Lighthouse and Chicago.

This one is not an easy one to find, and perfect copies will set you back about $800.