D'arcy (Darcy Draper) - Back at the Beginning 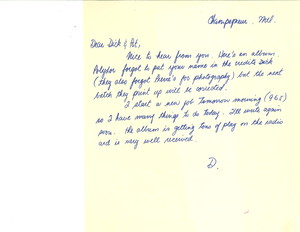 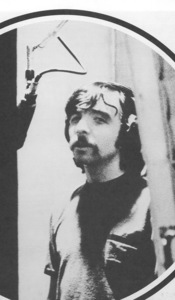 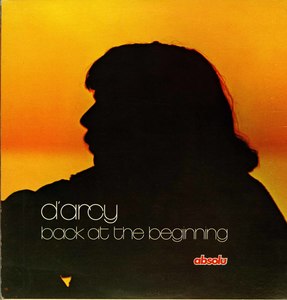 Darcy Draper-Back at the Beginning BACK 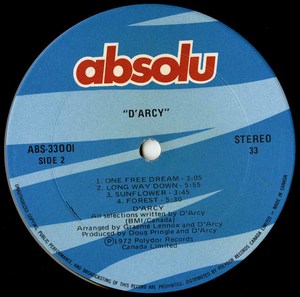 Darcy Draper-Back at the Beginning LABEL 02 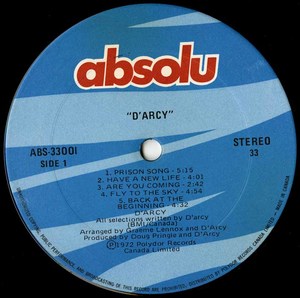 Darcy Draper-Back at the Beginning LABEL 01 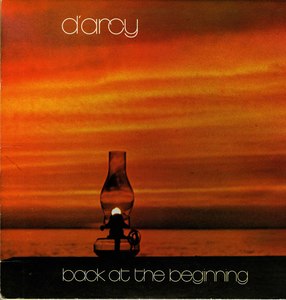 THE STORY OF DARCY DRAPER

Darcy Draper was born and raised in Montreal, Quebec. He came from a musical family and by his late teen years, had formed multiple garage bands, performing around Montreal. These groups (Black Sheep, and also Lost and Found) performed at high school dances and fraternity parties throughout the latter half of the 1960's. The second group (Lost and Found) only had two original songs, all the others were covers.

After leaving the Lost And Found in late 1968, Darcy embarked on a journey of musical growth and discovery. He opted for an acoustic approach and began writing and performing exclusively original material that he wrote. This period led him to meet and befriend a young guitarist by the name of Dick Kelder. The pair would form the folk/psych duo known as Mantra in late-1969.

Mantra was an interesting project; the unity of the two budding talents, begat a fruitful period of song writing. While Dick was more focused on instrumental pieces, Darcy really came into his own with his introspective "singer-songwriter" material. They played only a few shows, but garnered a small buzz. Thanks to past friendships in the industry, they were able to secure an album deal with M.M.&C. Records (a division of Trans-Canada). This label had 20 albums and about 8 45's, all of which were country, folklore, and fiddle; except for the Mantra LP.

With the new deal in hand, the pair recruited some old friends for the sessions. Ex-band mates of Darcy and Dick's, Pierre Fauteux (bassist of Lost and Found), Graeme Lennox (keyboardist of Size Five), and Dave Walls (drummer of Size Five) provided the core band but additional musicians were brought in; Larry Douglas (of Mickey Lee & The Swingsters) on pedal steel guitar and Roger Landreville on jaw harp.

The septet descended on Champagne Studios (located at 6900 St-Denis Street) in Montreal, during the spring of 1970. The album was recorded over a two day period, showing just how proficient the band was. The song writing however, is in a league all its own. This is mostly a vehicle for Darcy's amazing lyrical songs, but features some beautiful instrumental pieces by Dick. The album casts a longing melancholic cloud over the listener, providing brief spots of heavenly golden sunshine throughout; it’s wholly unique.

Through a stroke of luck, or perhaps a dose of rightful karma, someone brought a copy of the Mantra LP to Doug Pringle. At the time, Doug was the top DJ at Montreal's CHOM FM radio station. He was a great promoter of local talent and asked Dick Kelder and Darcy (as Mantra) to perform live on CHOM FM several times.

Mantra played the coffeehouse circuit throughout Montreal/Ottawa, eastern Ontario (with brief stops to Toronto), and the Maritimes. They played at famed venues such as: The Riverboat Coffeehouse in Toronto, Le Hibou in Ottawa and The Yellow Door in Montreal. They called the coffeehouse circuit home both before and after the release of their lone studio album. In the aftermath (late-1970) however, the band realized how thin their margins were and that they wouldn't be able to make a living this way. Considering nobody wanted to make the trek to New York or Los Angeles and take a chance, Mantra disbanded; leaving behind them a musical statement of amazing depth and complexity, highly coveted by collectors the world over.

When Doug heard that Mantra was breaking up he asked if they would continue to write if they could secure a record deal. Some of the members opted out but Darcy, Graeme Lennox, and Pierre Fauteux decided to stick it out.

A few months later, Doug Pringle kept his word and had secured a recording deal for the band with Studio Six in Montreal and Polydor who would master and distribute an album. Graeme, Pierre and Darcy decide that going for another purely acoustic album was not viable. Darcy approached Jerry Mercer and Rayburn Blake, asking if they would lend their talents to the recordings. They had to get permission from Donald K Donald, but thanks to the favor Darcy did for him a few months back, he said yes.

The newly founded (albeit temporarily) group went under the name "D'Arcy." They began rehearsing new songs written by Darcy Draper for the project. In addition to the above mentioned quintet, additional session players were brought in for the recordings. Denis Forcier provided lead electric guitar tracks for a few songs, Tim Forsythe provided piano and organ on three songs, Ron Dan on pedal steel guitar and Roger D'loger on percussion.

Upon its release, Back At The Beginning sold fairly well locally and even managed to get regular airplay on Montreal’s CHOM, thanks to Doug Pringle’s backing. "D'Arcy" recorded Back at The Beginning in 1972 at Studio Six in Montreal. Though they could have toured, Darcy never formed a road group. Everyone else had other commitments, and with no incentive, they moved on.

For many, this story doesn’t have a satisfying end. Both Mantra and D’Arcy wallow in obscurity, fondly remembered by the musicians who recorded it and a small devoted community made up of specific fans, Canadian music historians, record collectors, etc. The records were pressed in limited runs and never reissued; now fetching large sums in the collector circuit. Both albums feature mostly original material performed by some of the top musicians in Montreal (of the time). They are regarded by many as high watermarks in the genre of Canadian singer-songwriter/folk music; especially that of the late 1960’s and early 1970’s. Here’s hoping that this pair of phenomenal albums will once again see the light of day for new generations to hear and enjoy.

D'arcy were a psych rock band from Montréal, Québec. The first class lineup featured some of Canada’s finest musicians. The album features all original compositions written by D'arcy Draper. The band only recorded and released one album while together for a very short period. The album was accompanied with a lone single "Forest b/w Fly to the Sky" on Absolu Records ABS-4401 / Polydor. Denis Forcier went on to record two of his own albums and several singles in 1973. This particular album that I found had a hand written letter inside from D'arcy Draper to Dick & Pat, his address was on Avenue Champagneur, in Montréal:

"Nice to hear from you. Here's an album. Polydor forgot to put your name in the credits Dick (they also forgot Pierre's for photography) but the next batch they print up will be correct. I start a new job tomorrow morning (9 to 5) so I have many things to do today. I'll write again soon. The album is getting tons of play on the radio and is very well received. D."

Dick Kelder played and wrote 4 tracks with D'arcy on the Mantra LP that they had recorded together back in 1970. He wore a moustache. The last track on side two is entitled "Dick's Song".

This fabulous psych rock album is being made available by D’arcy Draper and the Museum of Canadin Music for the very first time since it’s initial release back in 1972. We think you will enjoy this outstanding and first class album, which features great writing, acoustic guitar, piano, all in all an outstanding listen start to finish, all culminating with the very heavy track "Forest"; all created by some of Canada’s finest musicians from the early seventies.
-Robert Williston