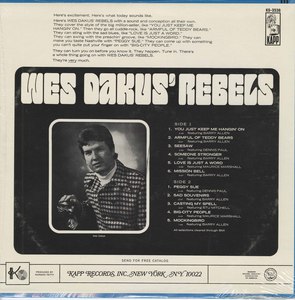 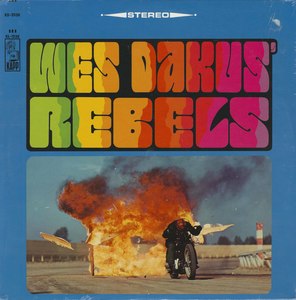 Wes Dakus was a reknowned Edmonton, Alberta musician who led several instrumental and British Invasion-styled bands throughout the ’60s and had a lengthy solo career.

Wes Dakus & The Club 93 Rebels formed in 1958 and often interchanged personnel with Edmonton’s Nomads. They were signed to Quality Records in 1960 and released “El Ringo” that year. Touring as the backing act for several other prominant artists, including Buddy Knox, which established the band as seasoned professionals allowing them to record material as Wes Dakus & The Rebels with famed producer Norm Petty (Buddy Holly) starting in 1962. Later sessions in 1964 also produced recordings for Dakus himself and erstwhile member Barry Allen’s side project as a solo artist. There were also singles released under the name The Dundeeville Players featuring guitarist George Tomsco.

In 1965 ‘The Wes Dakus Album - With The Rebels’ was released on Capitol and spawned several singles including “Hobo” and “Come On Down”. In 1966 an album of additional tracks was issued on KAPP in the US as “Wes Dakus’s Rebels”. In Canada the album was not released but split into several individual singles as solo recordings for the band’s various members including Wes Dakus, Stu Mitchell, Barry Allen and Dennis Paul.

Barry Allen went on to a prominant solo career and as lead vocalist in Painter and Privilege with former Rebels member Stu Mitchell; Rebels guitarist Bob Clarke died on December 13, 1998; Dakus opened a recording studio in the 1970s called Sundown Recorders in Edmonton.