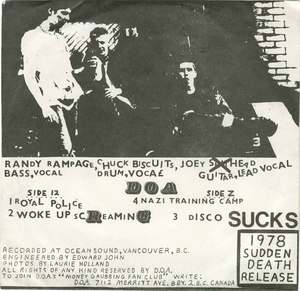 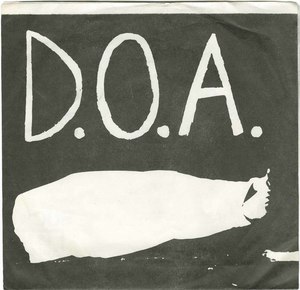 Vancouver's D.O.A. were an early and extremely influential punk rock band. Formed in 1978, they quickly got down to business by releasing the Disco Sucks EP on singer/guitarist Joey Shithead's own Sudden Death label. Along with other early pioneers, they blazed the trail to a North American punk scene by putting out records and touring with virtually no existing 'scene' infrastructure to rely on. Early shows included clashes with audience members and police, and they can attest that police riots at punk shows were not strictly an LA occurrence.

The original D.O.A. lineup was Joey, bassist Randy Rampage, and amazing drummer Chuck Biscuits. Their first full length came out on Friends records in 1980, and was soon followed by 1981's seminal Hardcore '81 LP. The latter is commonly sited by the first wave of "hardcore" bands as a catalyst and namesake for the that movement. Following this record both Randy Rampage and Chuck Biscuits left the band. Chuck joined Black Flag and began his long career as a punk rock band slut (Social D, Circle Jerks, Danzig). His brother Dimwit took over for him, and Wimpy from the Subhumans joined on bass. D.O.A. jumped to Jello Biafra's Alternative Tentacles label for the War on 45 EP and most of their subsequent records (short stints at Frontier and Enigma didn't last). War on 45 record found them attempting to ditch the punk straightjacket by interjecting funk, reggae, and a cover of Edwin Starr's Motown classic "War" into the mix. Apparently it actually charted in Billboard.

While D.O.A. shared the political commitment of Jello's Dead Kennedys or fellow Canadians the Subhumans, they also cultivated a party band image (exemplified by the cover of their 1985 effort, Let's Wreck the Party). Their manager Ken Lester billed them as a "populist" band. Joey has kept at it with various backing bands over the years, putting out a 1995 album on a Virgin subsidiary before revamping the Sudden Death label for a few albums and reissues.