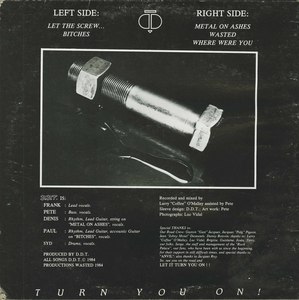 Let the Screw…Turn You On (EP)

D.D.T. (Dichlor Diphenyl Trichloroethan) formed in Magog, in December 1979 and was one of the best Canadian Heavy Metal bands of the 80's. In 1984 they released this album and afterwards they toured for 16 months, playing with bands like Anvil, Voivod and Sword. The track 'Let The Screw' was featured on the compilation 'Moose Molten Metal Volume 1' in 1985. They also recorded many unreleased demos: Violence, 1983; Demo, 1984; Burning, 1987; Freedom, 1990; Second Wind, 1990; Adam's Apples, 1991. The album was so rare and sought out that it was bootlegged by Revenge Of True Metal Records in Greece in 1993.

The band split up in 1989. The Tougas brothers went onto form the band 'Adam's Apples', and self-released a CD called 'Lovedrive', 1995.

A compilation of 36 tracks including the demos was released on double CD with No Remorse Records in 2013. The Anthology comes with a 16 pages booklet including rare photo material, extended liner notes and an interview with the band. buy it here: http://label.noremorse.gr/releases/item/61-ddt-let-the-screw-anthology-2cd

`Let the Screw...` Video was shot in 6 hours. It aired on Music Plus (local, Montreal) and Much Music (National ,Canada).

We set up, recorded and mixed in 18 hours total .
All Basic tracks were recorded at once, all of us playing at the same time. This is the case for all our previous and further recordings.
We recorded 1 additional song that did not end up on the EP because of lack of funds to mix and do vocals and solo overdubs. This song is lost in space!

We were the first Band to ever self produce a Heavy Metal record in The Province of Québec, wish is now the Mecca of All Specialised Metal Genres.

This record opened up a lot of opportunity to play, we toured for 16 months, also opening for a Quebec Tour For Heavy Metal Canadian band, Anvil (Lips still remembers!),and Later on ,Voivod and Sword.

We played in large venues, the tour culminated in Montréal, Headlining in an outdoor Venue concert with 2 other bands.
The crowd was singing `Bitches` with us...

We never had a real commercial record deal opportunity, all local labels were afraid of the genre, and we had the disadvantage of being of French speaking descent, which was at the time a big problem for the xenophobic Anglos, and Toronto Based Canadian Labels.
This Later proved to be the wrong attitude for Canadian Labels, they lost all Metal Acts coming From Montreal and the Province Of Quebec ,including Voivod.

D.D.T. Live shows were Very Loud and aggressive. Lights Punching from behind the Band, lots of smoke ...In those days every band carried its own gear, lights and sounds,technicians etc.

We had be-headed Mannequins covered in Blood, hung from chains and straps,The drum riser was an wooden platform that looked like an overturned dead insect .Some club owner were shocked as well as some of the female audience, because of the mannequins, that had female figures..As one band member said to some people complaining about it: `It is just plastic,with red spray paint,get a life!`.
Our music sets in bars and Clubs,were built around our original material,and we did cover bands like Led Zep, Aerosmith, Priest, Maiden, Motorhead, Accept etc., to complement the playlists and satisfy the general audience and club owners.

In other venues, we played the whole content of the '83 Demo, as well as the EP and some of the songs that were later recorded on the '87 Demo.

Nothing was glamorous or in de-luxe settings, we often played in small clubs, 5 nights a week, for very little money, considering the expenses. But we were a tight band on and off stage.

We had a great time!