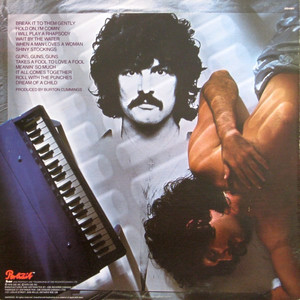 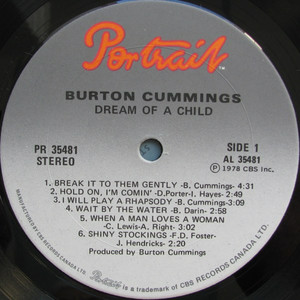 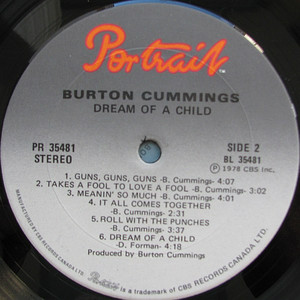 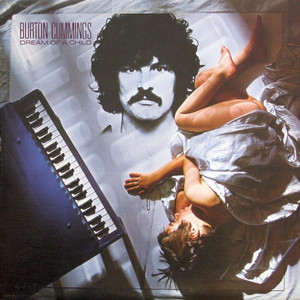 Dream of a Child

Dream Of A Child became Canada's #1 top-selling album of all time (since surpassed), going triple platinum during its long ride on the charts. Burton toured extensively to promote the album and was rewarded playing sold-out football stadiums in Canada, a feat usually reserved for foreign artists such as The Rolling Stones or The Eagles. This album featured many covers of other artists' songs.

Not to be missed: "Break It To Them Gently" is a moving story about a young man who got in too deep with strangers and ended up spending his life on the run. "I Will Play A Rhapsody" is another classic Cummings ballad with beautiful vocal harmonies overdubbed by Burton himself. Burton has never made any secret of his admiration for Bobby Darin and he does tremendous justice to Darin's "Wait By The Water". "Shiny Stockings", an excellent swing number, throws a real curve ball in terms of musical style, yet meshes perfectly with the continuity of the album and highlights Burton's wizardry on the piano. The title track, "Dream Of A Child", was not written by Burton but seems to have been written just for him. He has said it was a song he wished he had written but just never got around to writing it, so he did the next best thing, which was to record it. A favourite among Cummings fans. This album proved for once and for all that Burton Cummings was here to stay. Released on Compact Disc on 21 September, 1999 with the bonus tracks "Sweet Nothin's" and "Wild Child". "Sweet Nothin's" is an excellent cut, previously recorded by Brenda Lee. Says Cummings, "Unfortunately, the version that's here is not quite as finished as it should be. We were going to have a wailing sax solo and some guitars along with the sax and we never got around to doing that in the original sessions..." Nevertheless, this cut fits in perfectly with the mix of covers and originals on the album. "Wild Child" is a song about a wanna-be disco groupie. Cummings calls it "an honest representation of a certain era in my life and a certain era in music." As with many of the other bonus cuts, the production is minimal but the mood of the song is more than adequately captured in the lyrics and melody. Musically, it conjures up images of "You Saved My Soul" and an old Guess Who tune, "Pleasin' For A Reason".