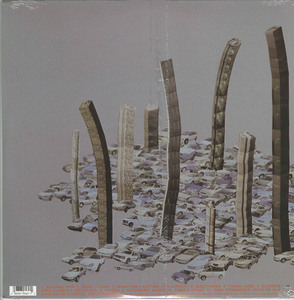 Constantines - Shine a Light BACK 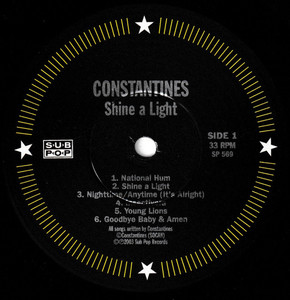 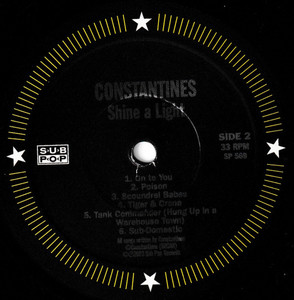 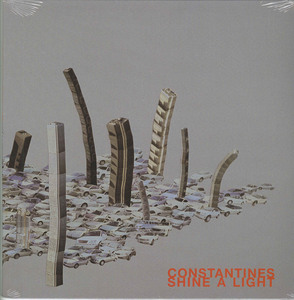 Though this is their second album, so few people heard the Constantines' self-titled debut that, in effect, Shine a Light is the introduction to the band's sound for many. Fortunately, it's a good one, delivering on the rough-hewn ambitions of the Constantines with a fiery intensity that few of their contemporaries can match. On harshly brooding songs like the title track and "Nighttime/Anytime (It's Alright)" -- on which singer Bryan Webb sounds like it's anything but -- and on quiet mood pieces like "Goodbye Baby & Amen," the Constantines sound focused, meaningful, and, above all, smart. Indeed, this intensity and intelligence can be overwhelming at times; the sharply restrained focus of Shine a Light's first few songs borders on the dour, and strangely enough, many of the album's more accessible songs come toward its end. Still, there's no denying the stark magnetism of "Insectivora" or the anthemic charge of "Young Lions," which reaffirms that the Springsteen comparisons surrounding the band are well-founded. Despite its occasionally intimidating sound, the group is capable of crafting fairly poppy songs without sacrificing any of its smarts or edge, as displayed by the excellent "On to You" and "Poison," which sound a little bit like a tougher, more soulful Spoon. Similarly, even the Constantines' most aggressive songs have intricate touches, such as the keyboard flourishes on "Scoundrel Babes." A tautly crafted, thoughtful album, Shine a Light more than follows through on the promise of their debut, and proves that the Constantines have the ability to be both down to earth and dramatic within their grasp.
-Heather Phares, Allmusic

Originally released by Three Gut Records (Canada) and Sub Pop Records (the rest of the world) in 2003 and since named one of the top 200 records of the 2000s by Pitchfork and often cited as one of the best Canadian records ever, this legendary album has been out of print on LP since 2007.

Since the release of their Juno-nominated self-titled debut and the widely praised follow-up, Shine a Light, the Constantines have become an underground rock staple, with guitars that steal the best parts of classic rock, angular indie, and heart-on-sleeve punk coupled with hoarse fire-breathing vocals. Given the tenacity of their music, both live and on record, I figured this band worked menial labor jobs from ages five to 22, stole their instruments, ate glass, and shit earnestness. One interview with singer Bryan Webb, and all those notions were dispelled. I couldn't believe what I was hearing: Eco-spirituality? Houses by the lake? Gordon Fucking Lightfoot?

Even in the midst of the final anniversary party for their label, Three Gut Records, Webb was relaxed and candid. He spoke optimistically of a time when his band could slow things down and diversify, modestly wondering if they'd make it that far, and what the immediate future might hold.
-Pitchfork