College, Joe & the Rulers - It Ain't Allright (With Me) b/w Working Class Hero 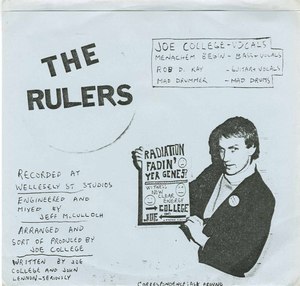 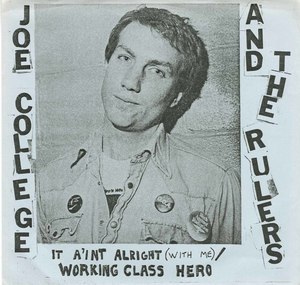 It Ain't Allright (With Me) b/w Working Class Hero

Joey notes in his blog that during the early days of punk in Vancouver, they were originally known as Joey Power and The Reactors and opened for acts like The Subhumans, The Modernettes and The Young Canadians (initially called the K-Tels). Along the way they formed a friendship with D.O.A. band members Joey Shithead, Randy Rampage, and their manager Ken Lester. Heavily influenced by Vancouver punk icons D.O.A., they launched Joe College and The Rulers in 1980 in Toronto and self-released and recorded this lone single in a quantity of 200 pressings on their own Ruler Records label.

The tracks have been described as follows: "It Ain't Alright (With Me), written by Joe College is a killer mid-tempo punk rocker with lyrics; "from Vancouver to Halifax, Toronto to Montreal there's 100,000 men in the bars alone, and it ain't alright with me, none of it ain't alright with me, we're all growing older and were headin' for a fall and it ain't too funny to me" with amazing guitar work including a hot extended solo and driving bass, drums, and Joe college's vocals are gritty!...then at the end is something I've never heard before, it seems as though the song is finished due to a great drums finish, a pause, and then you clearly hear Joe College say "let's check that one out or do you wanna go right into Working Class Hero", which is the flip side. Working Class Hero, written by John Lennon, is an amazing fast-tempo garage-punk rocker with Bo Diddly like guitar work ,fiery bass work, totally incredible guitar solo accompanied with a bass and drums solo, Joe College's vocals are perfect!"

Joey recently noted that The Museum of Canadian Music is "An Inspirational Joy..This new Museum of Canadian Music truly honours those foundational years and offers up pioneering acts from Atlantic Canada, Quebec, Ontario and across this great land. Best of all, 90% of the proceeds from music sales go to the artists!!!". Thanks Joe! You're Right On http://ojoecollege.blogspot.com/2010/08/online-museum-of-canadian-music.html