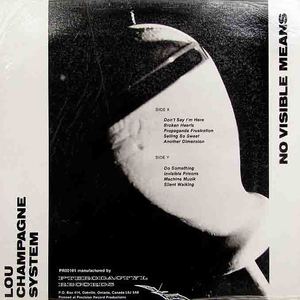 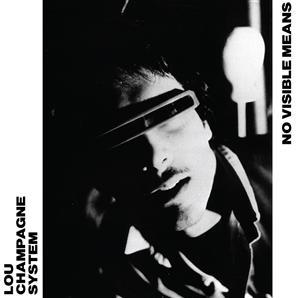 liner notes: The Lou Champagne System is a real time guitar synth solo act that uses a special guitar and hook up invented by Lou. It allows him to play guitar and sound like a whole band with no tapes!

Canadian post-punk classic by one-man synth, guitar and syn-drum band, Lou Champagne System. 'No Visible Means' was privately pressed on Lou's Ontario-based Pterodactyl Records in 1983. Over nine tracks he serves an impressively diverse array of post-punk styles, from more jagged guitar-driven wave pop to slicker electronic disco with a slightly daft but endearing darkside lyrical rhetoric. It's the latter styles which make up the highlights, including one in particular 'Propoganda Frustration', a standout piece of arpeggiated disco bass and tortured vox with a shifty patina of dubbed-out guitar primed for the darkest dancefloors. Equally on a dry, motorik minimal tip, there's the excellent 'Silent Walking', while the rest tends towards spikier punk modes, like the propulsive guitar and rushing machine rhythm vectors of 'Another Dimension' and the snotty fury of 'Do Something'.

Originally self-released in 1984 on Pterodactyl Records, “No Visible Means” is the work of Canada’s own Lou Champagne. Lou Champagne was active the Ontario music scene and also performed with other local musicians from that region as well. The “Lou Champagne System” was the real-time guitar synth solo act of Lou Champagne. Due to his knowledge of electronics, he was able to link his guitar, synth, and synthetic drums into a working one-man solo act that was playable with floor switches and pedals. The overall effect was the sound of a full band. “No Visible Means” was recorded in 1981-1982 and mixed in 1983. It consists of 9 works of unrelenting sonic bliss. The music can be described as synth-heavy, textural punk with a very diverse palette of styles drizzled in for a truly unique listening experience. “Don’t Say I’m Here” opens the album with a bang showcasing Lou’s angular guitar effects and emotionally powered vocals. “Propaganda Frustration” is a thick, modulated affair with overtones of minimal disco and motorik motifs that commands attention on the dark dancefloor. “Machine Muzik” is a standout track with effects-laden jagged guitar hooks drenched in a haze of electronics. From beginning to end, “No Visible Means” is a synth-punk masterpiece and will surely appeal to connoisseurs of the darker, synth-based outer limits of post-punk and jagged guitar-heavy new wave. Re-issued by Medical Records in 2012.