Carnival - Four Seasons b/w Out of My Life 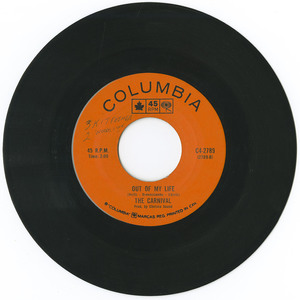 45-The Carnival-Out Of My Life 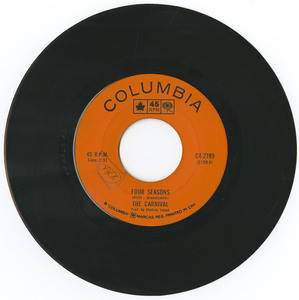 Four Seasons b/w Out of My Life

Hallman and Oberle were from Waterloo while Pellow, Brownscombe, and Wells were from Woodstock. In 1968, out of the ashes of The Flying Dutchman Drum And Bugle Corp., the band settled in Kitchener-Waterloo as The Trendsetters. Hallman, stayed in high school making the band a four-piece. That year they played on CTV's 'After 4' show in Toronto. Theey would do five of these appearances and from that show won the audition for 'It's Happening' starring Robbie Lane to replace his backing band The Disciples. The producer of the TV show, Mike Steele, wanted five bodies on the stage, so Tim Hallman got the call and walked straight into a national TV contract. The production, a 26 week run, was standard for its day . The Carnival taped at CFTO Studios on 13 alternating Fridays (two shows per session).

By this time the band lived in Don Mills, Ontario and pre-recorded the backing music at Chelsea Sound on Mount Pleasant Ave. in Toronto - a four-track facility - where it was necessary to pre-record between 18-20 tracks every two weeks as backing tracks for feature artists as a means of keeping up with the pace of the show. The performances on the show featured Robbie Lane singing live while the band, now calling themselves The Carnival, lip-synced - vocally and instrumentally. On occasion the band became a 'featured act' on the show. The young band got to meet, among others, Andy Kim, Eddie Floyd ("Knock On Wood"), and Grant Smith (minus his band The Power). They were working towards releasing an album (tentatively titled 'Keil Heil Kelly') but split up before it could be completed.