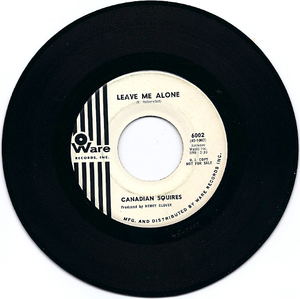 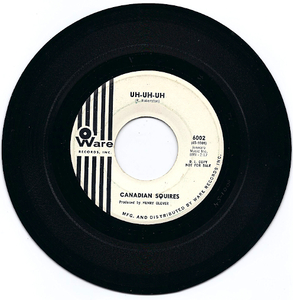 Recorded in New York with Henry Glover, who also controlled the Ware label.

Later known to us as Levon & The Hawks, this single was recorded in New York in 1964, and released on the Ware label that same year. Released soon after in Canada on Apex records. Both sides of the record were penned by Robbie Robertson. "Leave me alone" is a dynamite punk screamer loaded with phenominal killer guitar work throughout and screaming punk vocals. The B side is a fast paced rocker filled with fantastic harmonica and drum work throughout.

The Canadian Squires evolved from Ronnie Hawkins' backing band the Hawks. Hawkins and his drummer Levon Helms were from Arkansas, but finding huge success in Ontario, they started recruiting local musicians as original members of the Hawks returned to the U.S.

After leaving Hawkins in 1964, the group toured on their own, usually billed as Levon and the Hawks. Personnel changed periodically, but by the time of this recording, all the members of the group that would go on to become the Band was in place, four of the five from southern Ontario.

Hawkins' producer at Roulette, the legendary Henry Glover brought them into Bell Studios in New York to record two fine Robbie Robertson originals, Leave Me Alone and Uh Uh Uh, in the spring of 1965. Glover released these on the Ware label in the U.S., and on Apex in Canada.

In September they recorded two further Robertson originals, the soulful He Don't Love You and The Stones I Throw that made it to the Atco label, but all this was overshadowed by their meeting Dylan in late summer of '65.

Leave Me Alone is a legendary and super gritty garage punker that has been comped on "Teenage Shutdown Vol. 14", "Pebbles Vol. 10" and on "Boulders Vol. 2".