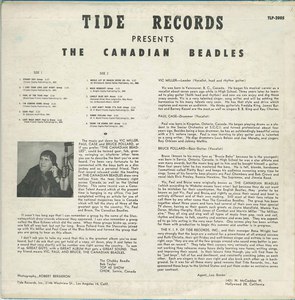 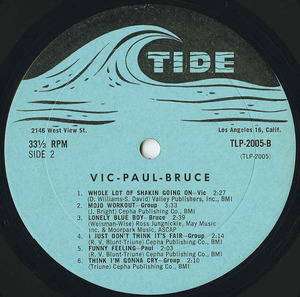 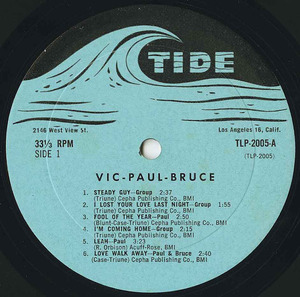 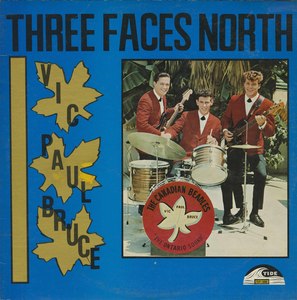 Here's a rare novelty one-off lp from the Canadian Beadles, who formed in Sarnia, Ontario in 1961. This album was released in 1964 on the tiny Los Angeles Tide label (Tide TLP-2005). The members of the band were Vic Miller, from Vancouver B.C., Paul Case from Kingston, Ontario and Bruce Pollard (aka Brucie Baby or Pretty Boy) who hails from Sarnia, Ontario. Bruce Pollard was formerly with the Staccatos and joined up with Vic and Paul of the Blue Echoes to form the Canadian Beadles. Later on, they would record a few 45's together as Vic, Paul & Bruce on the Quality and Tide labels. Most of the tracks are originals by the Canadian Beadles with a few remakes.
see also Canadian Beadles (as Mojo Men): http://mocm.ca/Music/Title.aspx?TitleId=269812
Canadian Beadles (as Vic, Paul & Bruce): http://mocm.ca/Music/Title.aspx?TitleId=269814

CANADIAN BEADLES by Gary E. Myers
In early 1963 our Milwaukee band, the Damells, was appearing in Ishpeming, MI and we became good friends with the Blue Echoes from Sarnia, Ontario. There were two places with live music in Ishpeming, the Venice and the Roosevelt, and although both bands played the same nights, we managed to get over to hear a couple of songs on our breaks once or twice (the two clubs were very close together), and we got together a few times in the afternoons. In May the Darnells headed for Southern California and, on the referral of a former band mate, we connected with Tide Records in Los Angeles.

We eventually returned to Milwaukee and the band broke up. Denny King, guitarist and leader of the Darnells, went back out to L.A. in early 1964, and invited Vic Blunt (aka Vic Miller), guitarist and leader of the Blue Echoes, to join him as bassist. Blunt and King recorded for Tide as the Mojo Men. (This record has no connection with any other Mojo Men; it was just Tide’s way of trying to get more mileage out of that name, since Larry Bright’s “Mojo Workout” was their only national chart record). Both sides are instrumental, except for Blunt’s Jackie Gleason impression of “And away we go” to kick off the A-side. Blunt then left a tape of his Blue Echoes with Tide owner Ruth Christy (aka Ruth Stratchborneo) and returned to Sarnia. A few months later Christy sent for the group and they came to Los Angeles with Blunt on guitar and vocals, Paul Case on drums and vocals and Bruce Pollard on bass and vocals.

Blunt (b: 12/18/43; Vancouver, B.C.) credited the Ventures and Fireballs among his early influences, as well as his father, who was a CBC studio guitarist. Blunt had previously recorded with Edmonton DJ Barry Boyd for the Quality label. Drummer Case had a strong Roy Orbison flavor to his vocal style and the group's entire LP (probably the only LP ever released on Tide) was recorded in only 10 hours of studio time, according to Blunt.

It was early 1965 and Tide booked the group into a show at the L.A. Coliseum titled KFWB's Beatle Alley. Requirements were that the groups had to be from outside the U .S. and had to have some sort of Beatle tie-in, hence the name change to the Canadian Beadles. (Perhaps the spelling was in order to avoid any claim of name infringement). Christy and Rena Fulmer (a partner in the Tide label), acting as an agent/manager team, booked the band, and Blunt said that both of the group's singles got airplay. I saw Blunt’s band (I don’t recall if they were still using the Canadian Beadles name) at a bowling alley lounge in the South Bay area of Los Angeles around 1966.

One of Blunt’s songs, "Questions I Can't Answer”, was covered by Don Atello (Tide 2002), and by German singer Heinz, whose version had some success in his home country. Los Angeles country artist Tony Treece, who was a later member of the Canadian Beadles, cut another of Blunt’s tunes, “Before I Lose My Mind”. Blunt later formed a show group called Center Stage and did additional unreleased recordings. As late as 1985 he was still playing full-time and living in Sequim, WA.