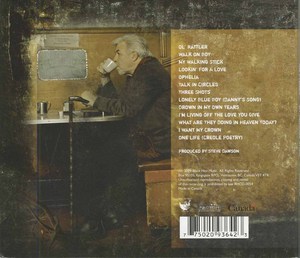 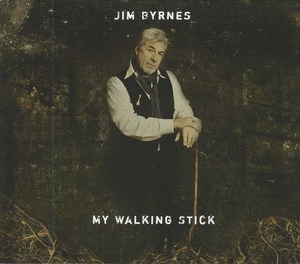 All of Jim Byrnes’s long-simmering interests blend perfectly in My Walking Stick, an album that finds deep blues, rough gospel, playful swing, and dreamy-eyed country getting along like distant relatives swapping tales at a well-oiled family reunion.

The Vancouver veteran’s association with young guitar god Steve Dawson bears especially fine fruit here, in a Dawson-produced set that has Byrnes growling, crooning, and finessing his way through tunes as varied as the bluesy “Drown in My Own Tears”, the doo-wop-ish “Lookin’ for a Love”, and a version of Robbie Robertson’s “Ophelia” that turns the Band’s brassy original into a pensive country ballad.

Similar wonders are worked on the gospel staple “What Are They Doing in Heaven Today?”, one of several cuts featuring a stellar vocal trio called the Sojourners (Marcus Mosely, Will Sanders, and Ron Small) in delightfully different settings. Dawson offers tasty support on slide guitar and other six-string permutations, and he’s joined on some tracks by old cohort Jesse Zubot on violin, as well as by Chris Gestrin’s room-filling Hammond organ.

But it’s the leader’s seasoned, sandpaper-and-honey voice that holds the centre on this crystal-clear, smartly paced recording. He’s come up with a number of potent originals, but the strongest song is the title track, an ode to his dapper cane actually penned by Irving Berlin seven decades ago, which takes Byrnes into twangy, minor-key jazz. The whole disc invites joyful participation; it’s one jamboree that doesn’t leave anybody out.
-Ken Eisner