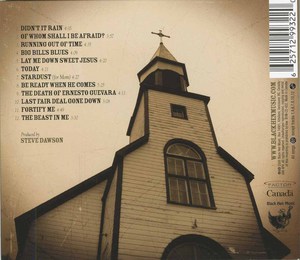 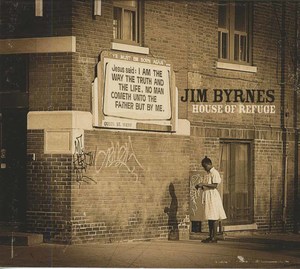 …songs of hope and longing and sin and redemption…

On House of Refuge, multi nominated and Juno Award winner Jim Byrnes has dug deep into the traditions that have influenced the whole of his life. Growing up on the north side of St. Louis, Byrnes was surrounded by the likes of Chuck Berry, Johnny Johnson, and Ike and Tina Turner. Over the years Jim has appeared with a virtual who’s who of musical history including Furry Lewis, Henry Townsend, Muddy Waters, John Lee Hooker, Albert Collins, Taj Mahal, Robert Cray, and Ray Charles. With House of Refuge, Jim Byrnes has let this life wash over him and come up with perhaps the most inspired and soulful album of his already accomplished and storied career.

Recorded and produced in Vancouver by another Juno Award winner Steve Dawson, House of Refuge is the follow up to 2004’s “Fresh Horses” and is much more than just a gospel tinged record. It is a twelve track long player of songs and stories of deep soul and faith all brought to breathe by a lust for life and a deference for death. Besides Byrnes and Dawson on guitars, the album features Jesse Zubot on fiddle and mandolin, Elliot Polsky on percussion and drums, Keith Lowe on double bass, Chris Gestrin on keyboard/organ/accordion and the gospel trio The Sojourners on vocals who are Marcus Mosely, Will Sanders, and Ron Small.

Starting with a stirring a capella section from The Sojourners, the traditional album opener “Didn’t It Rain” then launches into a powerful back beat of hope and salvation. This is quickly followed by two songs Byrnes penned when he was in Lithuania shooting the feature film Highlander - The Source. While the gorgeous “Of Whom Shall I Be Afraid” is a nod to the 27th Psalm, the slowly urgent death chaser “Running Out Of Time”, was written by Byrnes in the time it takes to sing it. Another Byrnes original, “The Death of Ernesto” was written in the middle of the night in the Utah Mountains after meeting Che Guevara in a dream. Whether it is the uplifting interpretation of the “Father Of Gospel” Thomas A. Dorsey’s “Today” or the ghost of legendary WLAC DJ John R in Robert Johnson’s “Last Fair Deal Gone Down” or even Jim’s version of young Canadian songwriter Justin Rutledge’s “Lay Me Down Sweet Jesus”, this is not just a trip, it is a journey. When the bone chilling curtain call closer of Nick Lowe’s “The Beast In Me” comes to an end, House of Refuge is a journey you will want to trip through again and again.

Jim Byrnes and his acoustic band has been a major draw at festivals and shows all over Canada the last 2 years and this year should be no different. Watch for Jim and the band as they tour to support their new album. From their House of Refuge all the way to yours.

If in the past ten to fifteen years, gospel’s lyrical content hasn’t strayed too far from its origins, its musical foundation sure has. North of the U.S./Canada border, it seems to have shed even more of its musical modesty, fraternizing openly with worldly sounds that church folk would have considered off limits back in the day.

Proof positive: House of Refuge from St. Louis-born and now Vancouver resident Jim Byrnes sounds like the Fairfield Four meets the Marshall Tucker Band over tumblers of Schwab’s Memphis mojo. Byrnes whips gospel, jazz, blues, country, and soul into such a divine froth that the listener can’t wait to savor the next track. Here Big Bill Broonzy’s “Big Bill’s Blues” is joined by Dorsey’s “Today,” and Robert Johnson’s “Last Fair Deal Gone Down” conjures the ghost of Nashville’s legendary disc jockey John “John R.” Richburg, a reminder of Byrnes’ earlier warning that we are “Running Out of Time.”

The finest moment on the album comes right at the beginning, in the opening strains of the first track, “Didn’t It Rain.” The joyous a cappella harmonies of the Sojourners, a quartet composed of Marcus Mosely, Will Sanders, and Ron Small, kick off the project, setting the mood for the marvelous musical combination to follow. I wanted to hear much more of the Sojourners on the album; they deserve a project of their own, if they don't already have one.

Although House of Refuge is noted for its unusual repertory, the most curious addition is an easy-going rendition of Hoagy Carmichael’s “Stardust,” which must have been a special request. Byrnes’ vocals bring forth the spirit of Louis Armstrong while instrumentally it’s all about Willie Nelson. Of course, the juxtaposition makes sense, given Byrnes’ eclectic but effective confluence of black and white roots sounds.

House of Refuge fits comfortably in the style of other Canadian gospel artists such as Danny Brooks and his fellow members of the NorthernBlues Gospel Allstars. This style of gospel is not clad in choir robes; it wears boots, and proudly so.
-Bob Marovich