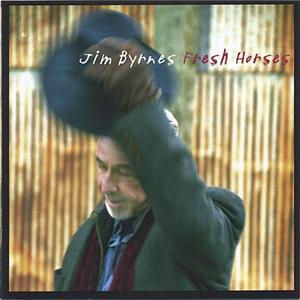 In no hurry to prove himself, gruff blues growler Jim Byrnes has recorded only four albums since 1981. Fresh Horses, his first in nine years, finds him saddling up with the wide-ranging Zubot and Dawson gang and laconically loping through a half dozen originals and such varied covers as Bob Dylan’s "Just Like Tom Thumb’s Blues," Neil Young’s "For the Turnstiles," Muddy Waters’ "I Can’t Be Satisfied," and the Mississippi Sheiks’ "I’ve Got Blood in My Eyes for You." Steve Dawson’s expressive Weissenborn, National tricone, electric tremolo, and acoustic slide playing, and Jesse Zubot’s evocative fiddling slice to the forefront of a fine band fleshed out by organist Chris Gastrin, double bassist Andrew Downing, and drummer Elliot Polsky. Long ago transplanted from St. Louis, Missouri, to Canada (first Toronto, later Vancouver), Byrnes has cultivated a career as a voice-over artist and television and movie actor (most notably in TV’s Wise Guy, Highlander, and The Raven). Fresh Horses is indeed full of character, but its slow, sensuous, and soulful qualities stem less from role-playing than Byrne’s hard-traveled but warm and affable persona and his palpably earnest commitment to such sentiments as "Love Is Just a Gamble."
-Derek Richardson