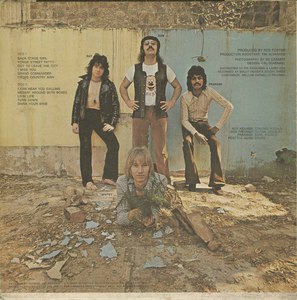 Troiano's new band was a musical departure from Mandala. Bush excelled in simple, blues-influenced songs that were raw without sacrificing musicianship. Onstage, the band took a more down-to-earth approach to performing, dressing casually and letting the music speak for itself. By this time, Troiano had become well-known for developing a unique guitar technique. "Troiano does things with the electric guitar no one else is doing," wrote L.A. music critic R.E. Maxon in 1970. "For instance, how about playing distinctly different melodies simultaneously? Can’t be done, you say? See Bush, and you'll see it done, as your mouth falls open." Reb Foster, a popular DJ from Los Angeles, traveled to Arizona to see the band. Foster ran a management company and was affiliated with ABC/Dunhill through his own production company, Cuordoroy Records. Impressed with the band, he got Bush signed to ABC/Dunhill.

Bush soon began touring with labelmates Steppenwolf and Three Dog Night. The band found themselves in the middle of a legal nightmare as they prepared to release their debut album in the middle of 1970. "ABC/Dunhill gave Reb his own label, Cuordoroy," said Troiano. "We were the first new signing to Cuordoroy, and just after we finished our album, ABC/Dunhill sued them, they sued ABC/Dunhill, and we ended up being the political football." Their eponymous album disappeared without a trace after its release. Nonetheless, Bush continued to tour in the southwest U.S. By the spring of 1971, the band had very little money and only a small following. In June, after a gig at the Bitter End in Los Angeles, Troiano, Kenner, Glan, and John decided to pull the plug on Bush. Although Bush was history, Three Dog Night recorded the band's song "I Can Hear You Calling" and included it as the B-side of their own single "Joy to the World." The single turned out to be one of the group's best sellers.