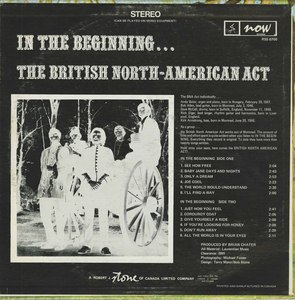 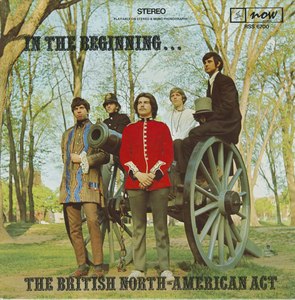 The British North-American Act formed in Montréal, Québec in 1968 and shortly thereafter they recorded an album of all original material "In The Beginning...", their only album, on Now Records in 1969. It was accompanied by the single "The World Will Understand b/w Joe Cool" on Now Records RS 600. The British North-American Act were Andy Bator, born in Hungary on February 20th, 1947 on organ and piano; Bob Allen, born in Montreal on July 3rd, 1946 on lead guitar; Dave McCall, born in Suffolk, England on November 11th, 1948 on drums; Rick Elger, born in Liverpool, England on rhythm guitar, harmonica and lead singer; and Kirk Armstrong, born in Montreal on June 20th, 1946 on bass.

The album was produced by Brian Chater. All material was Laurentian Music. The photographer was Michael Foster. The album design was by Terry Mann and Bob Stone.

The album features rather light pop psych material, but due to it's rarity and very cool cover, near mint copies of this album have been steadily rising and have sold for $1,800.00. The album was first re-issued on LP on Antar 7 in the U.K. (with a black and white cover) in 1987 and then again on Akarma Records AK 285 in 2004 before being released on CD on Afterglow AFT 005.

The British North-American Act took their name from the statute that was enacted 29 March 1867 by the British Parliament providing for Confederation and for Canada to become a Dominion within the British Commonwealth, eventually paving the way for independence from Britain in 1982.

The album is a bit lightweight for my taste, but side two has a couple of good fuzzy rockers. "Give Yourself a Ride" and "Don't Run Away", and maybe "If You're Looking for Honey" are the more rocking tracks, the first two really up my alley. If I could find an inexpensive copy on CD, I'd buy the album for those two songs at least. Love the cover!