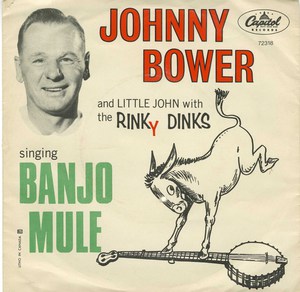 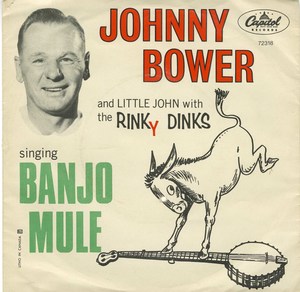 "Bower was content stopping pucks for a living and never had any intention to cut a record. But that was until songwriter Chris Young visited Maple Leaf Gardens during the 1965-66 NHL season to see if any members of the Toronto Maple Leafs wanted to help him out on a couple of songs he’d written.

Bower, never trained as a singer, agreed to lend his vocals to the songs after Young told him the record proceeds would be donated to charity.

Not long after, Bower, accompanied by a chorus of kids, including his own son, Johnny Jr., collectively known as Johnny Bower and Little John with The Rinky-Dinks, gathered around the microphone at a Toronto studio, to record Honky the Christmas Goose and Banjo the Mule.

The end result was a success. Sales exceeded 40,000 which, at the time, made Honky the Christmas Goose the biggest-selling Canadian-made single ever and Bower didn’t pocket a dime. All proceeds went to charity.

The song debuted on the top-50 CHUM radio chart on Dec. 20, 1965 at number 42 against some heavy competition as four lads from Liverpool were also climbing the charts with two songs of their own. The Beatles’ We Can Work It Out and Day Tripper were both tied at position nine for that week.

Bower’s song made it all the way to number 29 on the Canadian charts and became a memorable piece of sports and pop culture history."

Have you ever heard of the classic Canadian Christmas song "Honky the Christmas Goose," the one about the overweight goose who rides with Santa in his sleigh?
Released in 1965 as a novelty song, it was sung by Toronto Maple Leafs goaltender Johnny Bower. As the story goes, CBC producer Chip Young and composer Orville Hoover wanted a Maple Leaf to sing the song, so they worked with Maple Leafs public relations manager Ed Fitkin and went to a team practice looking for a volunteer. Bower, who had no previous singing experience, ended up being chosen.

"He came into the dressing room and wanted to know if anybody on the team would be interested in singing these songs," Bower told the Toronto Star in 2016. "I've never seen so many guys undress and get into the shower so quickly in my life! I was the only one left sitting there. He said, 'I guess you're the only one left,' and I said, 'Look sir, I can't sing.' I thought he was nuts!"
Bower volunteered to lace up for the cause, but only if the proceeds would go to charity. The song was recorded at the CBC with a group of kids, aka the Rinky-Dinks, and Bower ended up giving a top shelf performance.

"Honky" sold 40,000 copies over the holidays and it hit number 29 on the CHUM radio Top 40 chart. In December 1965, it also knocked the Beatles out of the top spot for most requested song for two weeks. It was official: "Honky" was a hit.

Bower sang "Honky" at events for many years, but it was the last song he ever recorded. The star goaltender, who died in 2017, also won four Stanley Cup titles with Toronto and took home the Vezina Trophy — twice.
-CBC Dec 17, 2020

It's a holiday chestnut, if not quite up there with "Winter Wonderland," "Silent Night" or "The 12 Days of Christmas."

On Nov. 9, 1965 Toronto Maple Leafs goalie Johnny Bower, his son, John Jr., and a group of enthusiastic if monotone kids who'd be named the Rinky-Dinks trooped into a CBC studio in Toronto. A few hours later, they had given birth to "Honky the Christmas Goose."

"It was fun," Bower said with a chuckle during a 1992 interview about the children's novelty song, which has become a cult favorite in Canada in the decades since its release. "But for a long time, there were a lot of mothers and fathers who used to phone and give me heck because their kids would get up at six in the morning and wake them with the record."

Bower died on Dec. 26, 2017 at age 93, his loss mourned but his life widely celebrated, seemingly everyone having a story about an encounter with one of the most popular, gracious Maple Leafs players of all time. He will be remembered again at the second anniversary of his death, and once more this holiday, 54 years after the song was released, Honky has taken flight again.

The 2:16 tune was the brainchild of CBC producer Chip Young and composer Orville Hoover, with Maple Leafs teammates volunteering Bower for the lead singing role. With proceeds earmarked for charity, Bower was the perfect choice -- the veteran goalie regularly played Santa Claus at team Christmas parties and was enormously popular with young fans.

"I told Chip the only singing I did was in the shower," Bower said. "But the challenge appealed to me and he talked me into it. He came over to the house and wanted to get my son, John Jr., who was about 11, involved in a little choir. So we all went down to the studio -- a bunch of neighborhood kids who couldn't sing worth a hoot and myself -- and we made the record."

("Banjo Mule," Honky's 1:43 B-side, isn't as memorable as, say, "Day Tripper," the flip side of the Beatles' "We Can Work It Out," which was released on vinyl the same month and coincidentally, also on Capitol Records in Canada.)

Honky, as the song unfolds, is too fat to be of much use for anything, until he learns to loudly blow his nose, jumping into Santa's sleigh to announce with his honking that Kris Kringle is on his way. Bower sang the first verse, John Jr. taking the lead with the second.

"It turned out real well," Bower said in great understatement.

Honky was a local smash, selling 21,000 copies the first week, nearly 40,000 during the holidays. In his 2018 biography "Bower: A Legendary Life," author Dan Robson reported that Honky climbed to No. 29 on a popular Toronto radio station's charts, even ranking ahead of Frank Sinatra's "It was a Very Good Year" on the Hot 100 list of the Toronto Telegram.

Today, Bower's grandson, John III, says that every member of the family has a different response to the song.

"For my father (John Jr.), it was a great moment that he and his friends spent with Grandpa," he said. "For myself, it was a rite of passage in elementary school to have to sing the song every Christmas at the request of teachers and principals."

Young was so delighted with the charity windfall that he tried to talk Bower into recording an entire album the following year.

"I told Chip, 'I don't know why I get involved in this,' " Bower said with a laugh. "He had a song he wanted to write about a pelican with a broken wing, another called 'Jumbo the Elephant.' I thanked Chip but I told him to find someone who could sing better than me. Now (in 1992), people tell me that Honky is a collector's item."

He won four Stanley Cup titles with Toronto and twice won the Vezina Trophy -- solo in 1960-61 and shared with Terry Sawchuk in 1964-65 -- before being elected to the Hockey Hall of Fame in 1976.
Two years after his death, the memory of Bower remains vibrant. He is still a beloved figure among Maple Leafs fans who was renowned for his huge heart and charity initiatives, immortalized in a statue outside Toronto's Scotiabank Arena on Legends Row.

The Johnny Bower Foundation was established five months after the goalie's death to continue his legacy of community work. Bower's grandson, John III, working with Richard Peddie, the former president and chief executive of Maple Leaf Sports Entertainment, and the Bower family, modestly began a foundation that today has grown to support many of the Hall of Famer's favorite causes: children's advocacy, public safety, Canadian military personnel, both present and past, the advancement of Aboriginal people, health, wellness, the environment and animal protection.

Now, 54 years after Bower, with "Little John" and the Rinky-Dinks, stood before a microphone, Honky flies again this holiday season.

"The song continues a special connection between fans and Grandpa during what was his favorite time of the year," John III said. "He loved singing the song to make people laugh and smile, especially when he was dressed as Santa Claus at events.

"The song is about overcoming obstacles and contributing to a team's success. Anyone who met Johnny knows that he believed that everyone has an important role to play in society and that they deserve to be respected. Honky was a perfect anthem for him."
-NHL.com Dec 21, 2019